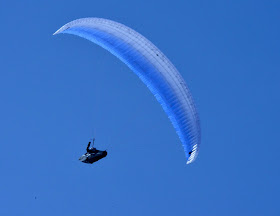 After flying practically every Trango, here’s the X-Race, the newest Trango version in its light material construction.

The Trango X-race has a new and beautifully engineered shark nose ! Semi circular, small opening cells, with a complete unsheathed line construction. I actually never seen this kind of lines before. The lower A’s and B’s are heavily coated and feels like a plastic wire ! Of course, this new technology will surely prevent the aging process ! My friend tells me it looks like the kite lines.
I flew that glider at 97 all up and the next day at 94 all up. I felt that the optimum weight under the SM goes around 95.
Launching the X-race is really easy and without any hanging back at all. In strong wind, the brakes are needed to stop it from surging forward.
Before the first flight, i remembered the Trango XC3 and thought that the X-Race could bear some of its genes. It doesn’t !
The X-Race felt completely different. 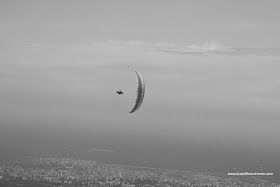 Once airborne, i could sense a more compact and homogenous feel under the X-Race. This glider moves as a whole. It seems that UP did an extensive work on it’s internal structure. Because the yaw and wobbling of the XC3 in turbulent air is no more present. Instead, there’s a new feeling of a coherent, solid, compact feel under the X-race !
It resemble a bit the coherent feel of the Trango XC2(two) but with an increase in comfort and control over both the xc2 and xc3.
The SM i received had a super short brake travel, which was probably wrongly set, because just one cm of brake pull after the pulley, activated the trailing edge. So i re-adjusted the brakes by allowing a 10 cm clearance after the pulley or the trailing edge response.

Now it was perfect ! The X-race has a moderate pressure. It’s a bit more hard then the xc3 and a bit less than the xc2 and the LM6. The thermals are felt through the brakes which is excellent for a racing machine ! The brake travel is short, linear, responsive .
The X-race with it’s 6.9 aspect ratio is an agile glider in coring thermals ! The compact feel coupled with a coherent structure and a swift, direct brake response, makes circling thermals, efficient and a real pleasure ! I could say it is more agile when circling in turbulent air than the LM6, and the Trango XC3.

This good handling is integrated in a climbing beast ! The X-race climb showed me a superb climb rate in weak and in strong thermals. The X-race enters the thermal without pitching forward or back. It has the ability to "surf the rising airmass” ! That’s the best way to describe it, as it felt exactly like that ! 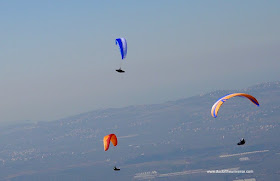 Each time a thermal is caught, the X-race jumps upward like a spring with a compact feel !
Doing some glides in moving air showed an ability to float and move forward giving its pilot a superb glide in racing conditions at trim and at bar!
Pushing the first bar showed a medium foot pressure and a very flat polar as it seems that the speed increases without the feeling of loosing altitude. The second bar is a bit hard to push on my X-rated 6, and the glide at top speed which is 13 km/h over trim is very competitive with a solid leading edge !  IMHO, i believe that the X-race matches the performance of the today’s best ,3 liner D gliders !

The C steering is a bit hard to pull ! At top speed the pressure is slightly less on your hands as at trim, but still a bit hard to pull. Pulling the C ball has a limiter. Controlling the glider with the C balls is efficient in moderate conditions and the profile remains clean. You can easily pull the C ball all the way when thermalling brakeless, with no event, but i found it climbs best with a little brake pressure.

Ears with outers A’s are stable. Big ears with outers A’s are little un-stable.
While on bar, pulling the two connected outer B lines are stable and efficient.
Wing overs are easily done on the X-race with a playful character. 360’s also are quick to enter and easy to get out.
Pulling the brakes beyond the hip upon top landing, should be carefully mastered as the X-race doesn't accept to fly very slow with very low pulled brakes. But easy for good pilots to feel.

Conclusion: UP designer and the R&D team has done an amazing job with the X-race !
A swift handling, a solid feel, a rocket climber and impressive floater, a relatively easy to manage (high-end C) certified glider.
I believe that the Trango X-race with it’s 6.9 aspect ratio, has the highest score for the overall package of (performance/comfort/handling) in today’s C category. 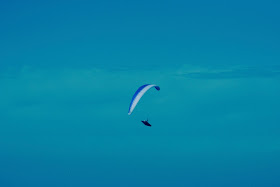