After the Carrera plus , here’s GIN new light B glider with an aspect ratio of 6.1
Take off is super easy as the glider inflates quickly with no overshooting.
Flying the Explorer S (75-95) at 94 all up with an X-rated 6 harness.
The brake pressure are similar to the C+ ones ,and the explorer can be steered with only 10 cm of brakes travel in moderate thermals. The response is shorter than the C+ with (more or less) same agility. And with much more brake dampened behavior.(less sharp)
The thermals are felt by the risers. Nothing comes through the brakes . The Explorer feels like a solid ,dampened ,comfortable to fly mid B glider. I know that the AR is 6.1 but it doesn’t feel at all … 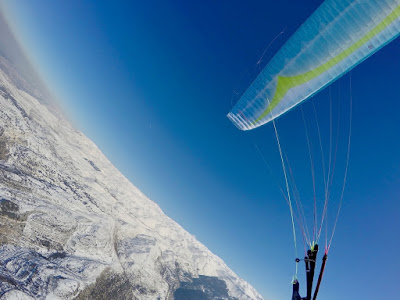 Flying next to a loaded Rook 2 seems to show a slight 0.5 km/h faster trim for the Explorer with probably a very slight edge in glide performance at trim. At full bar the Explorer S at 94 all up, has around 8- 9 km/h speed over trim taken at 1500 ASL. The glide at full bar seems close to the Rook 2 with also a slight edge…
Another example, is that flying a Chili 4 with it’s edge in overall performance, feels more demanding to fly than the Explorer in turbulent conditions.

The overall performance of the Explorer is quite nice for an easy B glider. The Carrera plus overall performance is slightly higher but with more pilot workout. The Explorer felt much easier, safer, and more comfortable. Flying the Explorer at full speed is very usable. I have tried to pull 10 cm one A riser at full speed and the Explorer leading edge didn’t collapse. So the margin at full speed is fully usable even in turbulence, with the ability to steer the glider efficiently while on bar, with the C risers in moderate turbulence.
Big ears are very efficient, stable. They reopen by a slight brake amount.

Conclusion: Let’s keep the original Carrera and the Carrera plus, aside. Their glide performance and especially their climb rate is ‘legendary’ !
The explorer could be the most easy to fly 6.1 aspect ratio B glider ! The overall performance are very good for the category, but not comparable with it’s bigger sisters. In my humble opinion, i believe that the Explorer is aimed for a wider variety of B pilots and i think any B pilot coming from the mid, high B category will be welcomed on the Explorer. 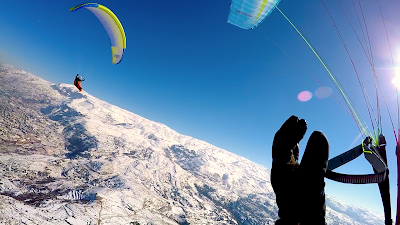 A light, quite maneuverable, easy to fly and to pack, a ‘cool’ companion for adventure flying with good overall performance. That’s the Explorer !

After receiving some emails from professionals in this sport and friends , asking me about the Explorer test i have written earlier.
And since dear friends and fellow pilots pointed that the test was made with an “L” size Rook 2  size which goes to 115 kg, and that the Explorer was an S size that goes to 95, i found that they have a logical point there, assuming that they still haven’t flown the glider yet, or see it fly.
Taking their request respectively, and on it’s positive side, It came also to my mind to check the Rook 2 L which has around 90 hours, and the knots on the A’s B’s and C’s are still factory tuned. After checking with 777, This L size must have the C’s released after 50 hours in order to maintain the performance it was aimed for. I’ll do it this week and hopefully, looking for the performance benefits it will deliver as it was originally designed to do so.

After the request for a video, I tried to fly the Explorer more accurately again, but now with a Carrera plus size S flown slightly for a season, and my usual mentor 4 S size .
We made sure that all the pilots carried ballast and some without, to reach equally the weight of 96 all up !

Like i said earlier, the Explorer is a super easy and fun glider to fly ! The glide performance is really nice for an easy 6.1 aspect ratio B glider.
Induced asymmetric are easily maintained without any rotations if counter steered. And induced frontals are hard to pull, a slight altitude loss but with quick opening.

Climb rate is superb if the thermals are not influenced by any wind or valley breeze, I could say that the Explorer is a floater. In head wind or facing the valley breeze, the original Carrera, and  the ‘loaded’ Carrera plus (to avoid its pitch back) seems slightly floatier in entering those cores. But that’s super precise and picky …and won’t matter to most.

To be even more precise : The Explorer felt loosing slightly some speed in entering those thermals, while the C+ pitch back but floats upward.
That doesn’t mean that the Explorer doesn’t climb…On the contrary, Its still an excellent climber !
Now please consider that even the new Bolero 5 have an edge in climbing in weak cores versus some other high end B’s !! I’m not joking here…That’s true. It’s really efficient in climb, but i’m writing my tests not only in one encountered soft thermal without turbulence and wind that could affect some gliders more than others…

The glide at trim and accelerated is very close or similar… But you can easily fly the Explorer S at 93 all up, while to be competitive in head wind glides, the Carrera plus S must be flown at + 95 …or 97…still with a very efficient climb.

The pluses on the Explorer is the cool easy to handle glider in rough air ! Flying it in strong days could be quite fun and easier than the C+.
The other plus : It seems that the Explorer doesn’t loose heights after leaving thermals, much better than the Carrera plus in that manner.
Can i say a little minus?  :-)    I wished for a slightly higher top speed .

Kindly remember that test flying wings is not doable ‘only’ with glider side by side flying, but it’s a completely different approach involving feel-able impressions of efficiency, a glider can deliver in difficult, weak or strong moving conditions, given for any sensible pilot who already have the ability to test fly plenty of them before purchase.

Now flying either the C+ and Explorer, performance in XC flying will be very close,  and the differences are mainly on the pilots skills. So may be i should have said in the earlier test : “Glide is closely comparable to the C +” which could be a more apprehensive and better politically write up.
Again, IMHO, the Explorer is a successful, light, easy to fly, XC glider, and i liked it’s nice handling, good climb, and glide. But can we please agree on one thing ? even GIN admits it…its not a boomerang    :-)
http://www.gingliders.com/paragliders/explorer/

Since a video is highly requested. Here it is… Enjoy
Cheers,
Ziad