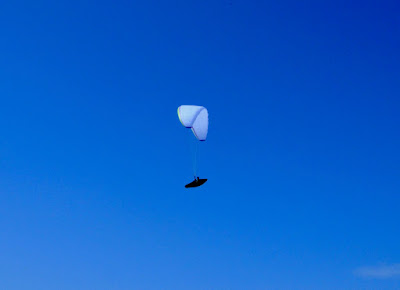 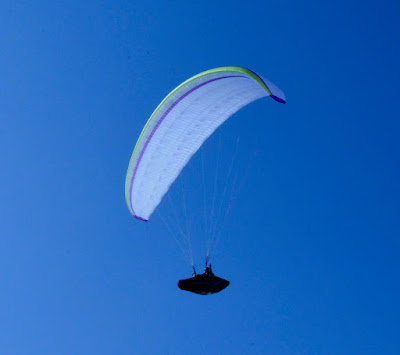 I have waited more than 6 months to receive the S size. The 99 cell low aspect ratio glider from NOVA has indeed a very complicated internal structure. This process of construction is delicate and takes lots of time to be completed. The price of the Phantom is high…Twice to three times more expensive than a conventional low B glider. The fabric used is light for most of the delicate parts.
Lets find out if the high price and the complicated construction will give its user the required benefits …

Launching the Phantom is similar to any B glider with a fast rise above the pilots head.
I flew the glider from 95 to 98 all up.
The Phantom has a different feel than any low or high B glider. The construction gave me the impression of flying under a higher rated glider in the feel of the airmass but with a huge passive safety like any low B glider. Weird feeling, but on the positive side of things.
The brake pressure is moderate, probably lighter than the Mentor 4, but very short in precision ability. If the brakes are pulled a bit far, the Phantom reacts like a low B glider with good passive safety. The brake fan gave me a short, precise, fairly agile, turning ability.
With the Phantom nose ‘cool searching’ tendency and its precise turning ability, i could imagine myself on a higher aspect ratio glider, but the high dampened feel under the Phantom woke me up to reality. No matter what the conditions throws at you, the Phantom overall movements above the pilots head are very limited, giving you the feel of a ‘Rolls Royce’ of the sky ! Really like that ! It needs a bit active piloting, but much less than a Mentor 4 and slightly similar to an Ion 4.
The difference in feel between the Ion 4 and the Phantom is that the Phantom has a smoother but compact profile, a better handling ability, and of course, an impressive increase in a totally easy to use performance through the whole speed range!

In weak (0.5m/s) , the pitch is nearly absent as the Phantom slows down a bit before entry at trim, without any pitch movement whatsoever.  This is why some pilots reported a difficulty in climb in very weak stuff.
The climb commence slowly in weak thermals, and will be very efficient and much faster in moderate thermals (+1.5m/s, or +3m/s ) versus other B gliders.
For example, flying the Phantom is weak thermals versus the Mentor 4 (four) S similarly loaded, showed similar climb ratio. In moderate thermals the Phantom climbs slightly better !
Flying the same Phantom S with a Mentor 5 S also similarly loaded, showed that in weak stuff the Mentor 5 or a Chili 4 is floatier. In strong moderate to strong thermals ,the Phantom structure will help in a more coherent feel and very efficient climbs very close to any high end B glider.

Considering that the Mentor 4 has impressive performance that could match some high C gliders, and as i always reference it in my glide comparison, even with other high end gliders, i took it to compare with the Phantom.
Gliding with a Mentor 4 S in calm air, both loaded at 95 all up, showed a similar glide angle. It is in moving conditions that things gets a bit different.

Ears are easy to induce, efficient, and reopen quickly. Induced asymmetrics and frontals are super easy to recover.

Conclusion: The Phantom has a low aspect ratio of 5.19 ! (3.82 projected! ) IMPRESSIVE !
It behaves like any low B glider. The handling, the feel under it and the way to turn the glider is excellent for the category. Low B pilots can fly the Phantom easily. The performance is indeed on the top shelf of the High B category. Good pilots downgrading to the Phantom will find on one side, a comfortable ride, and on the other, top performance in the B category. It doesn’t resemble a Ferrari, nor a Porsche .
Its a Rolls Royce with a 500 HP engine!  Rolls Royces are expensive, but you get well served !

The handling and the way to turn the XS at 88 compared to the S at 97 are:
A lighter brake pressure on the XS , and a longer brake travel, but 'more' agile to turn !

The overall movements in turbulent air are slightly livelier than the S size but really very reassuring !
The differences in turbulent air between the Mentor 5 XS at 88 and the Phantom XS at 88 is that the M5 feels more energetic and needs much more active piloting.
The differences in turbulent air between the Mentor 5 S at 96 and the Phantom S at 96 are not that far...as both feels very dampened.
It seems flying the XS at top weight is best, without the feeling of an overloaded glider. It still climbs well.
The Phantom XS is a fast 5.1 aspect ratio B glider at trim and accelerated for the category.
Ears are stable and efficient !
A reliable small companion for fun XC travel.
Easy to use, "slightly" less piloting level than a 777 Knight S or Buzz Z5 MS, which are superb B gliders ! ( The Phantom XS has less pitch surging behavior in turbulence) with very nice overall performance.
I liked that XS size !   :-)
Hope it helped a bit by relocating that XS size !
Cheers,
Ziad 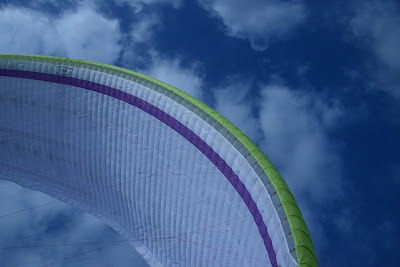