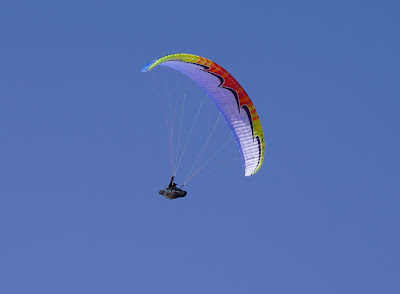 The Vision is U-Turn high B with an aspect ratio of 6 and relatively light construction. The S size weights around 4.6 kg.
Taking off is super easy without any hard point. The Vision rises smoothly and stays above the pilots head.

I flew the Vision S at 94 all up. The brake travel has moderate travel, and pressure with very good agility. The Vision can be steered very tightly in small cores. Despite the 6 aspect ratio, the Vision is super far from the earlier Carrera from Gin for the extra comfort and smooth behavior in the air for the Vision.
The moments in turbulence are very comfortable and I really asked myself many times if really the Vision has a 6 aspect ratio!  The overall movements in turbulent air are quite tame and showed me a super balanced glider. Some gliders with 5.5 aspect ratio that I have earlier tested, needed more pilot input in strong air. The Vision has surprised me by its mellow reactions.
The pitch stability on the Vision is very high as it cuts smoothly into the airmass. 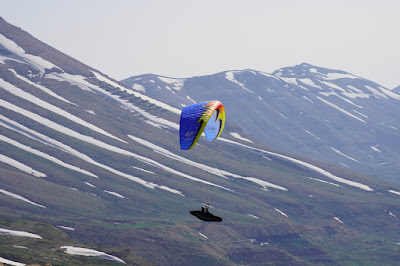 Inducing some asymmetries and frontals seems surprising to behave like a lower grade glider.
The Vision cuts through the air like an efficient high B glider and the speed bar is very usable in turbulence. The C steering is efficient on the Vision for a 3 liner. Staying at bar, the C steering can control almost any pitch movements in 75 % turbulent air.  One of the most efficient 3 line B glider, for control ability on the C’s.
The glide at trim and at max speed are like the very best you can find on a high B.  Gliding in a headwind or against the valley breeze is efficient on the Vision, especially at bar.

The climb rate in weak thermal at 94 all up, is nice and relatively ok. The climb in strong thermals is smooth and rewarding by its comfort.
The top speed is around 12 km/h over trim, taken at 2500 ASL. Big ears are stable and efficient. They reopen very quickly. 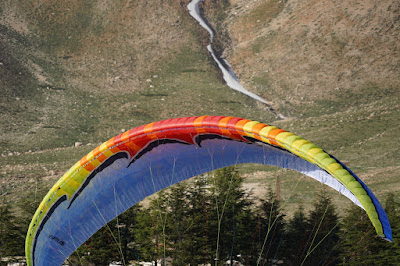 Conclusion: A very well balanced high B glider. The impressive ratio of comfort, efficiency, and glide at speed. The Vision can be considered as an agile glider, and I think it could be the first high B glider with an aspect ratio of 6 that behaves and feels like a mid-B, even after collapses. The Vision overall performance package can easily challenge some mid-C gliders in XC conditions at trim and at bar.
A must try in order to feel the high overall ratio of “comfort and performance”.