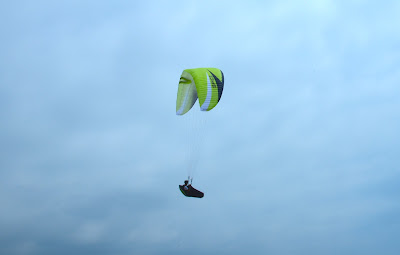 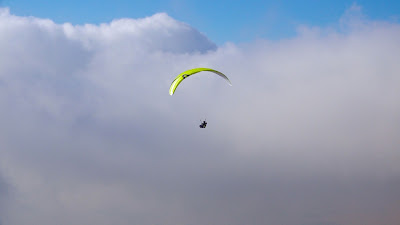 After test flying the Cayenne 5 here’s the light version, the Spice.
I flew the Spice at 91 all up with a woody valley rated 6 .

The material used on the Spice is quite delicate resembling the LM6 cloth. Thin rises with a complete set of unsheathed lines.

The Spice with its light cloth is easier and faster to launch than the C5 especially in low wind take offs.

I have flown the Spice in multiple sites from difficult and turbulent conditions to average thermals with the company of the Cayenne 5 which let me to draw accurate conclusions on behaviour and performance.

The brake pressure on the Spice is moderate to light, less than the LM6 pressure and close enough to the C5 XS but with a slightly less direct feel.

The Spice is for sure an agile glider, that gave me some flying pleasure.
May be just only 5 % less than the C5 XS in direct feel and agility for the same loadings !
Flying it in turbulence gave me the impression that it has a slightly more neutral pitch or slightly pitch back sometimes than the C5 XS i had earlier for the test.

I would say that the Spice in XS size is slightly more comfortable than the C5 in XS size for the same loadings in moderate thermals.
That doesn’t mean that it’s an entry C glider. The Spice still needs more active piloting than the Alpina 2 in strong conditions.

The climb rate of the Spice XS loaded at 91 compared to the C5 S loaded at 99 is quite close.

In very weak climb (0.5 m/s ) the C5 S will have the edge in surfing upward those tiny lifts.

The glide at trim and accelerated is very close to the C5 which puts the Spice also as one of the best C performer for the light category.

The speed bar has a moderate to light pressure. The ability to control the pitch with the C risers is efficient in moderate turbulence.

Very small ears are stable but not efficient. Big ears are unstable. Pulling the B3, is stable. It gave me -2.5 m/s with full bar and the reopening is super fast.
Pulling the C3 with a slight bar is little more delicate and has also the same efficiency as pulling the B3’s.

Wing overs are super big and a joy to make.A playful glider for sure !

The Spice has a low stall speed and it’s efficient to top land accurately in narrow spaces. It stalls below the hip with a small warning sign which is easy to avoid for the keen C pilot.

Conclusion: I had a fun time test flying the Spice. The agility and the energy are good for the C category coupled with top performance. The feel under it is slightly mellower than the C5 XS in moderate thermals. In strong thermals and turbulence it needs the same level of piloting as the C5 XS with a similar behaviour.
My only regret is the pitch back upon entering thermals on the Spice which wasn’t felt on the excellent Cayenne 5 XS or S i have flown…For sure it feels differently tuned !
I’m sure that many pilots will appreciate the overall feel and potential of this light, top performant C machine.