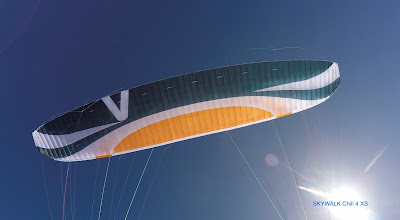 SKYWALK Chili 4   (The powerful package)
Yes …..They were a bit late to arrive !
Two SKYWALK gliders with an EN-B certification. One is the S size (85-105) and the other the XS size (75-95)  Both are the new CHILI 4 as a high-end B glider which will replace the floatable Chili 3 !
Lets see what SKYWALK did with the Chili 4 who took quite a while in development. I was very curious to see what are the benefits on the B category and i was keen to see if SKYWALK did manage to keep the excellent climb of the Chili 3.
Looking closely at the glider showed a trendy approach with a shark nose, a  pure 3 line configuration, with very small minimalistic and finely tuned line width ! Some lower lines are sheathed and the higher ones are unsheathed. Putting all the lines on one hand, feels indeed very small, it looks smaller than the Mentor 4 ones.
Launching the Chili 4 XS at 92 all up is an easy task with no delay or shooting forward. A simple glider to inflate.
In the air…and already smiling… The brake pressure is exactly to my liking. Not as hard as the Mentor 4 one, nor as soft as the Rush 4 one. It has a moderate pressure with immediate short response. I could put the glider exactly where i wanted with a linear travel !  It isn’t as agile as the Tequila 4, but close enough! I can say that the Tequila has a playful handling, as it dives on quite playfully when you pull hard.
The Chili 4 has a Joyful efficient handling. It doesn’t dive but has a “flat” corkscrew ability  :-)  !
The pilot can steer it with a much more flat performance turn ! At my all up weight, i was able to core the inside of any thermal. The agility ressembles the Rush 4 or the Swift 4 which are excellent handling gliders.
With it’s short, linear, responsive and agile character, SKYWALK managed to fix the old Chili 3 handling problem for good !
I’m going to write now a bit about the brand new S size (80-105) flown at 100 all up versus the Mentor 4 S (80-100) flown at 95 all up. (This Mentor 4 S has only around 50 hours) And still in a very good shape and wasn’t flown beside testing and comparing in XC conditions.  Both sizes are flown 5 kg less than the top certified weight.
Gliding along the Chili 4 S with the Mentor 4 S showed a similar trim speed. Probably the Chili 4 S has a 0.25 km/h faster. Comparing the trim speed of the Chili 4 S at 100 all up and a Cayenne 5 S at 100 all up will give the Cayenne 5 a little more speed at trim . (Just for infos only)
The top speed of both the Mentor 4 S and the Chili 4 S loaded as mentioned above has the same top speed with a slight 1 km/h more for the Chili 4 S.
What are you waiting for ?  ;-)  The glide ? .. or the climb rate ?  :-)   Lets see…
The climb rate in weak and difficult conditions gave me the impression that the CHILI 3 DNA is inserted deeply into the CHILI 4 !
But i think it’s much, much better…The Chili 3 was pitching back a bit before entering. The CHILI 4 has a super stable pitch entry ! I was flying for the last months the Zeno, and when the Chili 4 arrived, to be honest i was worried that i have to loose some flying days testing it…as i thought it will have this B feeling in thermal searching and performance feel  !
I was wrong! The ability of the CHILI 4 to (slide, sniff, surf) the airmass is amazing, just like flying a higher rated glider. When all is calm above your head, you could hear the vario…Bip, bip, bip… It gives the impression to grab every bubble without the leading edge pitch and movements.
It doesn’t attack and search forward, but it climbs slowly and peacefully.
Flew with my Mentor 4 S near the Chili 4 S, and i felt this edge in float ability as if my friend was flying his Cayenne 5 S ! Each time the thermals weakens the CHILI 4 floats better.
For sure it’s an efficient climber and here again SKYWALK has managed to keep the excellent climb of the Chili 3. 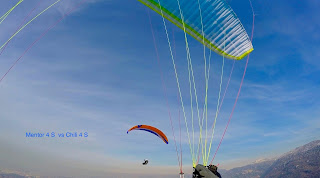 The glide in calm air at trim and accelerated at full speed is very ,very, close to the Mentor 4 …but…
In all the testing I have done before on the Mentor 4 and other gliders, I was always certain that if any glider could beat the Mentor 4 in glide it would be pretty awesome!
especially in moving air !
For example, I was pretty close to the Cayenne 5 S which eventually had the edge in overall conditions.
Lots of pilots nowadays still ask about the glide in moving conditions… Well IMHO, it’s the BEST way to see the ability of gliders to surf the airmass efficiently…and it’s not done on a single glide where one can get a lift and other will loose it, it’s done on frequent glides, felt and seen, frequently on tip to tip glide comparisons.
Doing those glides against the CHILI 4 S was obvious to the eye that the edge was now on the CHILI 4 side !!!
In overall conditions, the efficiency of the CHILI 4 was tested, felt, and validated, to let me conclude that the CHILI 4 with it’s narrow edge is now the benchmark for the high-end B gliders.
The problem for SKYWALK now is to create a more competitive Cayenne !
Flying in some moderate turbulence, the tips flutters a bit without any consequences. The CHILI 4 moves in turbulent air like any high-B glider.It’s not a super comfortable glider nor a difficult one to manage. It ressembles the Iota, Mentor 4 ability to control.
Big ears are stable with and without accelerator. They open immediately without touching the brakes.
If you pull two lines on each side, for much bigger ears, it will be un-stable (a bit). I must find something…  :-) 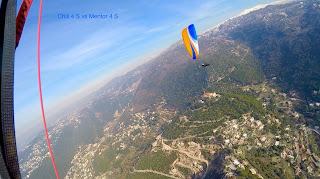 Pulling one riser and holding it, doesn’t get a high sink rate and it requires a good weight shift and a little brake control to keep it straight. But so easy to handle for a high B.
Induced frontals are hard to pull in. It’s like the feeling of a two liner. Heavy pull is needed to collapse it. The reopening is average to good.
At full speed, the Chili 4 has around 13-14 km/h over trim and the leading edge still feels solid as pulling the riser doesn’t quickly collapse it.
360’s are efficient and the glider stays quite some turns to exit, so braking a bit the opposite side helps a lot.
Conclusion: What can i do when i feel satisfied with a tested glider beside a large smile ? I’ll happily write about it for you to experience my findings !
The CHILI 4 with it’s technical line configuration, need a good B pilot to master it efficiently, like any high end B glider and a careful approach to prepare in bad launching areas, with stones and roots. I found it best to fly the S at 101-103 all up and the XS at 91- 93 all up with no worry about the climb in weak.
Apart from that, the CHILI 4 gave me the sensation of a pleasurable flying machine with nothing but ’top’ overall performance, efficient and agile handling, amazing climb and gliding performance!
All that with a 5.65 AR (4.2 AR Projected) !   A very powerful package !
I’m very sure that some serious manufacturers are also aiming for excellence. For now the CHILI 4 has strongly earned its place among the best. Lets see what the future brings.
Beside doing competitions with speed tasks, I always wonder why we always look for higher aspect ratio gliders when a low AR good B can offer us tremendous amount of performance, swift handling, good passive safety, pleasurable feel and a deep happy satisfaction !
Happy landings  :-) ! 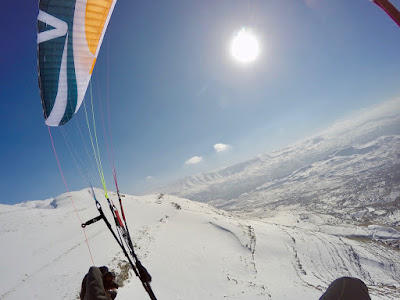 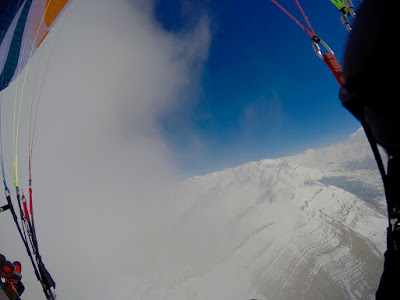 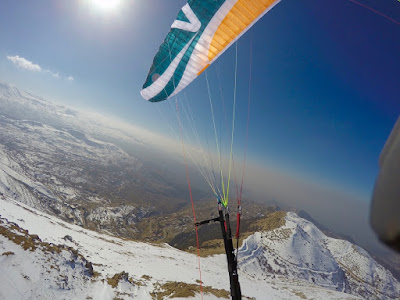