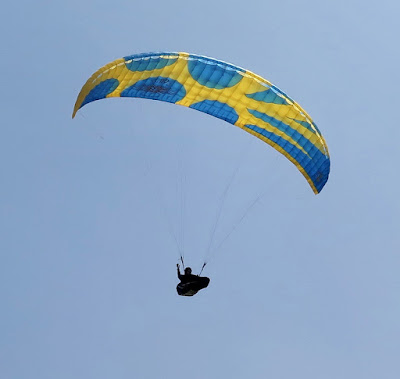 This is my first Icaro glider ! Don’t ask me why ! It didn’t happen…Surfing around, i entered the new website of Icaro : http://icaro-paragliders.com/en/ !
When I open the site, i saw ‘colors !  all over ! it was like calling me to surf around more ! Beautiful pictures, and a really nice web design! I have to say this ,because it is unique and most probably there’s an artist involved in that web design!

Back to testing gliders. I saw the new Gravis and wrote an email to Icaro ! Since no one gets them over here, i paid for it and here it is. An M size in blue/Yellow color !
The risers are also a bit different in design. The pictures attached shows the yellow colors for the pulleys and the attachment point. The Gravis has a moderate shark nose with 7! lines per side. Very well engineered. Liros lines on the bottom, unsheathed lines on top ! And Skytex 32gr/m2 is used to build the Gravis.
The workmanship on this B glider is excellent ! The details and the way it is built is a class of its own !

Launching the Gravis cannot be as simple as that.A moderate pull and the glider awaits overhead the pilot command.

The first time I flew the Gravis i was alone in the sky, and it gave me the impression that this day was really generous in lifts !   I sensed already a superb float ability for the Gravis. The next day, i flew with my friend on his Rook 2 ML max 115, (Freshly inspected). I knew that if i can fly near him in weak climb, (similarly loaded) my senses would be correct ! And there it was !
After two hours of flying next to a large high B, the Gravis proved me right ! Its indeed a floater ! Every bubble is converted into immediate lift. I was super efficient in climb.

In turbulent air, the Gravis is not a dull glider to fly. It communicates the airmass quite nicely. I can place it in the middle of the B category in pilot demand. Not too dull not too dynamic for a B glider in roll and pitch movements. The Gravis seems very coherent in turbulence.The passive safety and intended comfort feel for a mild B are present.

The authority on the brakes for the Gravis M size flown at 101 all up is surprisingly good. Whether i pull 10 cm of brake the Gravis would go nicely on a turn, or i can crank it below 35 cm and again it reacts like a cork screw. I can say its fairly agile and has a very nice coordinated, linear brake travel ! I was testing the Chili 4, and the Mentor 5 the same week, and when i flew the Gravis, it surely gave me the cool, passive safety feel, but i was pleased for the handling it offers! Not really as agile as the M5, but it has a more coordinated brake feel ! which i like.

Big circles or small circles can easily be adjusted by pulling the brakes without loosing the wing homogeneity and air surfing. Very good for a mild B.
Trim speed is a bit less than the Rook 2 and the M5. I think the Gravis has around ±37 km/h trim speed. Stepping on the bar is smooth and i could reach 8 km/h over trim at 1200 ASL.

I don’t want to compare the Gravis with the high end B’s (Rook 2 or the Mentor 5) in glide, just because the Gravis is intended for occasional week end, B pilots and it showed a mild character.
But i have to say that i saw an excellent glide efficiency for the Gravis putting it right on top on the mild B’s out there!  No need to look around for more glide efficiency in that mid B segment ! I’m sure that any pilot would find more than he imagined :-)

Big ears are slightly tough to maintain. They reopen very fast by themselves. The Gravis has a low stall speed and it can be landed in narrow places.

Conclusion: Nice looking glider, cool handling, efficient in climb and glide for a mild B, it makes you smile even if you only look at it :-)
I’m sure, the Gravis has the potential of making long XC’s in a cool manner. 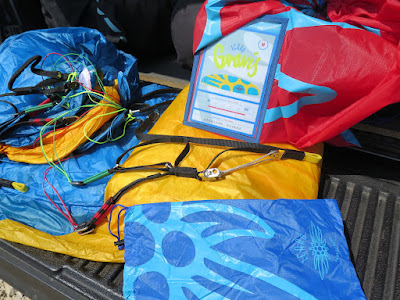 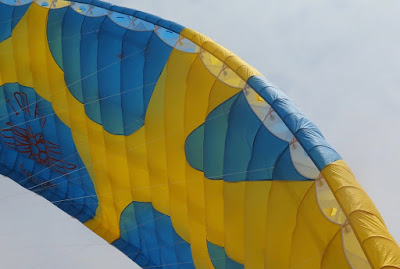