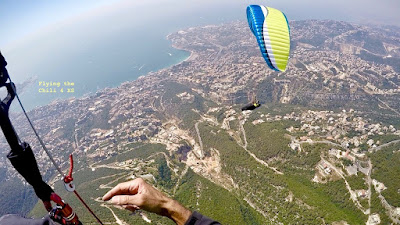 I flew both the Rise 1 and 2. Here’s the Rise 3 from Air design. A high -end B with 5.95 AR and lots of design technologies from a Lightweight construction, to the Stabilo Winglets which are an interesting funny looking new feature, a Shark-Nose
and  Vortex Holes on the extremities , Mini-Ribs, Race unsheathed lines but it looks not that skinny, and tough enough, Thin performance Risers with a C-Control System !
Everything is there to show that AD are aiming for performance at first…Lets see…

Launching the Rise 3 is very easy without any hang back or surge. The light material has its benefits in the launch characteristic.

At 90 all up, the Rise 3 S has a short, precise brake travel and could be described as fairly agile.
The pressure on the brakes are moderate for the 10-15 cm of brake travel that actually are needed to steer the glider in all thermals. After 15 cm the pressure are slightly on the heavy side.

While flying through mild turbulent air, there’s some wobbles and small yaw movements coming from the glider. I flew in the same air the Chili 4 XS size at 94 all up, to conclude finally that the Chili 4 XS move as a block compared to the Rise 3 S. After some flying hours, alternating the two gliders, the overall comfort is similar with a slight ‘shock absorbent’ feel to the rise 3 S that Air design i famous for. The chilli 4 XS has slightly more sharper reaction to strong thermal punches.

After some hours, i got used to those tiny wobbles that doesn’t amplify their energy when conditions got stronger. They are just here.
The overall piloting level is above the Rise 2 and is similar to the Chili 4 XS or the Mentor 5 XS.

Flying next to my reference B glider, the Chili 4 XS, i found out that the Rise 3 have an impressive climb rate ! After many attempts on the Rise 3 S (72-92) @ 90 with the Chili 4 XS (75-95) @ 93, i was convinced that this Rise S size climb has a slight edge ! I was really surprised about that, knowing that the Chili 4 XS is one of the most efficient climber on the B category.

At 90 all up, the Rise 3 S doesn’t have some annoying pitch behaviors, but rather an efficient nose to surf those thermals and climb, like any good high-B glider.

I noticed that every thermal is quickly converted into climb very efficiently. And the brake authority helps a lot by putting the Rise 3 S inside narrow cores, without any reluctant behavior of the leading edge to dig in.  Sometimes i need to insist slightly to turn it inside the thermals, as it flattens out sometimes. It shows also the ability for a flat efficient turning behavior. 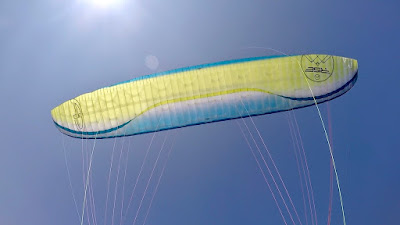 I must say that the Rise 3 S is a nice floater in the high B category ! Racing facing the Valley breeze is as efficient as on the Chili 4 XS !

At those weight load above, my friend and i made a few glide comparisons on an exceptional August day with high cloud bases!

Trim speed is similar and the glide at trim seems also identical !
At 5 km/h over trim, both glider are also inseparable in glide !

The overall piloting level is not far from the mid aspect ratio B gliders, despite it’s 5.95 AR and i could say it’s an accessible high end B glider with a fairly good handling.
I think the lines used on the Rise 3 S, will not move that easy…They all are unsheathed, and slightly thicker than the contenders .
The Rise 3 in size S has those small wobbling movements, but they are very easy to get used to, and could be an advantage for the pilots who don’t like the ‘block feel’ above their heads.
Finally i can say that the Rise 3 has joined the circle of the top contenders in the high B category for it’s overall efficiency in climb and glide, and it’s certain that any pilot flying the Rise 3 won’t miss any performance whatsoever racing against the new 2017 Mentors and Chili’s !


It seems that Air design has worked very hard on the Rise 3! And it surely paid off !

Hi Ziad
I have recently flown this glider in a comp. I can’t say that I fully understand what you mean by wobbles and yaw movements coming from the glider? The air on two days of the comp was fairly stable and a spicy. So I’d like to think that I had the chance to fly in rough conditions.
Although not everyone in the comp agreed. I agree with the climb rate, it’s a beautiful floaty wing similar to my Delta 2. I think I should have flown the wing harder than I did, pushing more on the speed bar. We had long valley crossings, and at times I was getting smashed in sink.
I had two decent collapses and both were very manageable. Never had cravats coming out of either one. Wing tips were very well behaved, when other wings close were copping tucks.
I was flying this wing as a demo, but have decided to buy it, replacing my Delta 2.

Thanks for the reviews Ziad. Appreciate your work