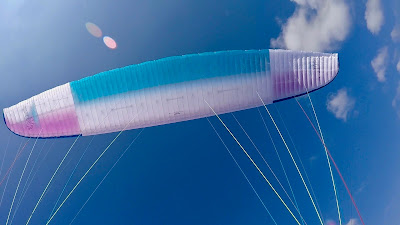 Finally the long awaited Queen replacement arrived. Triple Seven offers the Queen 2 with an aspect ratio of 6.3 combined with very reduced line diameter and a very pointed shark nose. The cell openings are rather small. The attachement points on the A’s seems further back, and the certification is into the C box.

Launching the Queen 2 in size SM in nil wind need a steady input as it inflates moderately overhead. The rise is moderate and fairly ok for a C certified glider.

I flew the Queen 2 from 96 to 99 ,to find out that the best weight is around 98-99 on the SM in moderate conditions.  The brake travel is short, linear and precise. The pressure on the brakes are moderate to ‘slightly’ hard. The glider feels connected to the pilots commands, if the load at top weight is respected. The Queen 2 SM is slightly sensible to load.  I mean it’s better to fly it from 97 minimum to 99..100, and you will notice immediately the difference with 2 kilos added.

Thermal radius:
The Queen 2 SM loaded can be turned very narrow turns inside the thermals. It’s like you are flying a low aspect ratio glider. In well built thermals, it’s feels like a spinning ’top’ sometimes !  This narrow thermal ability is efficient to get the most out of any thermal !
There are no banking from the glider if the brakes are applied moderately and swiftly, but a flat quick, and efficient turning radius.

Climbing ability:
In turbulent and punchy cores, the Queen 2 climbs really fast! The brake authority are slightly reduced in turbulent cores, but still present and very good for a 6.3 AR, C glider.  It ressembles the best ones in the C class in climbing ability even loaded at top.  This is definitely a very fast climbing machine in well built thermals. For sure, any C glider will climb also, but not as fast.
In weak conditions, the Queen 2 SM at 99 is efficient in catching small weak thermals. Actually the Queen 2 SM size feels big, and a weight of 99 all up is doesn’t seem to be really over loaded.  In weak conditions at max load, i found it quite efficient in climb. 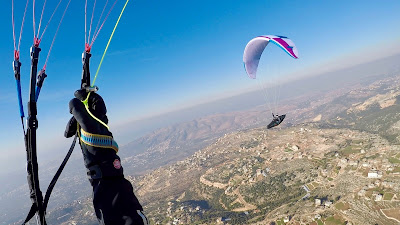 Glide:
I found that the Queen 2 in SM size has its best glide angle at trim speed, and it’s among the best C’s of the moment !
Doing lots of glides in calm and turbulent air with some headwind glides, i found out that the Sigma 10 and the Delta 3 has that very slight edge at bar, especially at 4km/h over trim speed !
The Delta 3 SM has slightly lesser top speed than the Queen 2 SM but if the Queen 2 SM matches the Delta 3 SM top speed, the glide at that top speed is almost identical !

The fast trim speed and the immediate climb rate while going forward, could give an edge to the Queen 2 in ridge gliding.

Easiness of flight:
For a 6.3 aspect ratio glider with those top performance, i found out the the Queen 2 is easier to handle in rough air, than the Cayenne 5 XS i have kept for reference. The feeling under the Queen 2 can be described as : solid, comfortable, homogenous, tough structure, absorbs the turbulence. It resembles the Delta 3 feel but with a little spice. It fits exactly between the Cayenne 5 XS and the Delta 3 in pilot demand.
Saying that i also feel that the Queen 2 has quite some hidden energy in it. It feels very dynamic in wing overs that could be quickly very high. And also, in some strong thermals, the glider quiet character wakes up slightly to a sharper glider that bites the thermals going forward slightly which is quite common for any high end C glider. There are no pitch back whatsoever ! which is nice :-)

Conclusion:
Today’s paragliding designs and progress seems really demanding. Manufacturers are working super hard for getting the bar slightly higher !
I felt that in XC mode, the new top 3, C’s can be very close.
The Queen 2 loaded at top, is relatively a moderate C glider, that could be flown quite efficiently in XC competitions and will satisfy almost any performance and speed seeker in the C class especially for its high (overall package) of climb, glide and top speed.

Hi,
The Elan 2 26 is more comfortable to fly than the Q2 SM .
Agility is closefir both. Trim and top speed also.
Overall glide goes to the Q2.
Cheers,

How is the Queen 2 in feeling the air and turning in tight cores compared to higher aspect wing such as Trango Race.

Hi,
The Queen2 could be turned more tightly into cores than a Trango Xrace. Cheers