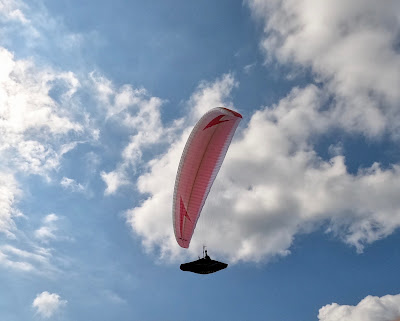 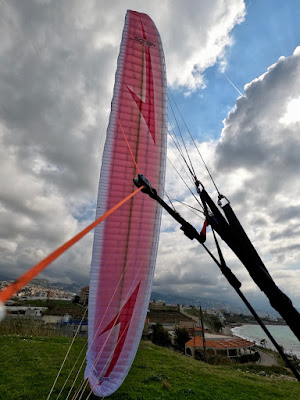 Launching the Helios is super easy, even in nil wind. The take-off is immediate.
The Helios S (75-95) flown at 92 has a moderate to light brake travel. The authority on the brakes is very sweet in thermals. Immediate control is delivered by the brakes, and the turning radius inside a thermal is accurate.
In turbulent air, the glider obeys each action on the brakes. Overall its a nice and playful glider to fly. The moderate aspect ratio of 6 gave the glider smoothness and easiness in turbulent air. I found out that there were some high B’s more difficult to handle.
The climb rate is nice for that glider. In weak conditions, I couldn’t say it's very floaty but ok… The glide angle is in the first half of the C category. The speed bar is easy to induce, and way accessible in turbulent air.
The ears are stable, have a good descent rate, and reopen by themselves.
Conclusion: The Helios is a light C, very easy to fly, nice handling and authority on the brakes, with no tiring in turbulent air. 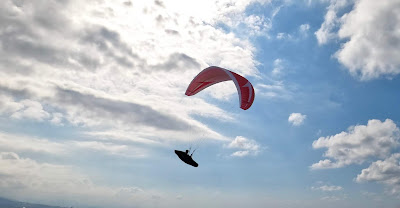 As I said, I found out that some higher rated B gliders are more difficult to fly in active air.
Being a C glider, the Helios seems to give that C feel, but with the accessibility of a mid B glider.
Posted by Ziad Bassil at 8:39 PM