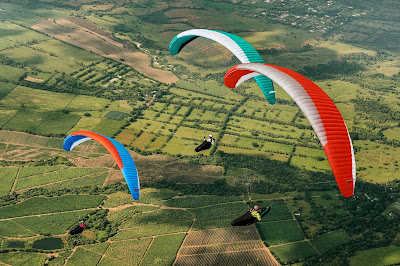 1-  What can the R&D team comment about the internal structures of current paragliders? Are we still far from a more solid and cohesive structure in order to produce a 6 AR or lower glider with 2 line design?
The engineering of two-line gliders does not require excessive solid structures. Much more important is the right balance between sufficient stiffness for a clean surface on the one hand and enough flexibility to absorb the energy of possible turbulence on the other hand; this is the goal to strive for. Actually, this logic applies to every paraglider design, but we will have to find quite innovative airfoil shapes to satisfy the requirements made at a low aspect ratio wing with merely two suspension line rows (or groups of line rows). Certainly, it would be imaginable to realize a very stiff wing that only needs two rows of suspension lines. For instance, one could think of reinforcing the ribs with loads of plastic or Nitinol wires. Or very stiff but foldable materials for the ribs could be used. Such an engineered glider would probably fly very well. But the problem is that, as soon as it comes to extreme situations the glider still has to have the ability to absorb the energy of turbulence in order to ensure safe and comfortable operation.
Probably in the next couple of years, the manufacturers will accomplish to create new low aspect ratio designs that satisfy the criteria stated above. First, we'll see such design in the C class and someday even B gliders won’t be special having just two rows of suspension lines.

2- I think every pilot in the world question ADVANCE ’Winglets”. Could those winglets be removed in the future? as there’s a lot of wingtip designs with swept wings that have good aerodynamic efficiency, and they do also reduce the vortex effect.  Or ADVANCE will insist on keeping them for the future?
Nobody can imagine an ADVANCE wing without its winglets! Only ADVANCE is using winglets in the paragliding construction, but winglets are well known in general aviation for reducing the vortex. We made very serious aerodynamical research and we are sure that the benefit is higher than the drag they generate. Some years ago we analyzed the effect of winglets carefully by CFD methods, and the result was that they reduce the drag by about 2.8 % depending also on the model. This corresponds to a glide ratio improvement of about 1.5 %.

3- Before releasing a new glider in a B, C, or D category, does ADVANCE R&D try to get another good glider from a different brand with similar certification in order to fly it, feel the difference and see if their new product will have a difference regarding comfort, agility, climbing abilities, or gliding at speed? Of course in moving air?
Of course, it is of immense importance to know what our competitors are creating. To see where are their strengths and which behaviors clearly would need improvements. Not knowing which other good or bad gliders are around would bring the risk of running into a tunnel and very likely overestimating the quality of our own gliders compared to the totality of paraglider designs.

4- What about light materials? It seems that the light materials are becoming more durable, and it's now being used by many manufacturers in their regular everyday glider use. Does the light material help in faster recovery after a collapse? What is the benefit of light materials besides reduced weight?
Light material’s durability, in fact, is much better than its reputation. This is the reason why even the “heavy” versions of gliders are being designed more and more with light materials. Mostly the interior design is the first way to go for when optimizing the weight of gliders. The weight of used materials clearly has an impact on the behavior of gliders in extreme situations. However, we would be careful stating that light materials generally improve behavior in extreme situations. As light materials are often softer than the heavier materials the stability is clearly affected. There are cases where this can have positive effects but there are also cases where the resulting behavior is influenced in a bad way. Collapses can recover faster but do not always in each and every design. Also, we have to mention, that fast re-openings of collapses are not always good. So we often try to slow down the re-opening process by just a bit. In terms of safety, it is more important that the glider flies straight and doesn’t stall accidentally after a collapse than re-opens as fast as possible. Gliders with lower weight canopies have a lower moment of inertia. This means that their resistance against angular accelerations about every axis in space is also lower. This can make the glider stop earlier when shooting forwards after a collapse because it needs less force to stop the unwanted movement.

5- I’m an old fashion pilot…So excuse me if I personally find that hammock harnesses despite their superb back and support comfort, do not offer the best precise weight shift in strong and turbulent air. Will ADVANCE consider a harness that can be used both ways to please everyone? but with a seat board that can be placed “above the seating straps “, not just sliding it over the protection, which doesn’t really change much.
A hammock harness is a possible choice for a pilot, not an obligation. Some like it, some don’t. At ADVANCE we know what the benefits are and we love flying with hammock harnesses, like thousands of pilots all over the world flying our Impress and Lightness models. It’s reducing the weight and the volume of the harness, it eliminates the problem of a too large or too narrow seat-board. But more important than this, it gives the pilot a precise feeling coming from the wing, but not exaggerated like it can be with a seat-board. The feeling is something personal and we cannot tell “this is good or this is bad for you“. With the new IMPRESS 4 the pilot can decide to fly with or without seat-board, depending on the wing and the mood of the day. In the end it is the pilot’s choice.

6- What can you say about the future Sigma11 ? in terms of brake authority in turbulent air versus the Sigma10. In rough air, some pilots commented that longer brake pull was needed on the S 10. And I have received emails about bigger sizes of the S 10 that I didn’t fly that was not that agile!
Comparatively the upcoming SIGMA11 benefits from direct and progressive handling and we are very satisfied with it. The canopy is more compact but also more reactive to steering inputs. This results in excellent controllability, not only in turbulent air but in every situation from ground handling over long-distance flights to the top landing. The pilots for which the SIGMA11 is intended are the same as those for the SIGMA10, there is no change about this: it's for an experienced pilot, no doubt.

7- Can you please also comment about the “usable” performance of the S 11 protos in moving air + speed, if you have already measured for an S 10 similar size.
We are proud of being able to say that the performance of the SIGMA11 is even higher than that of the SIGMA10. We massively improved the feeling whilst flying in turbulent air. The canopy feedback is softer and the pitch is very stable. This results in a very high usable performance.

8 - It is super difficult to improve a successful model with the same aspect ratio and a 2 years' time. Any future Iota 3 on the draw boards? Does the same aspect ratio imply?  Any comments?
Yes, you are right it is a very hard and difficult challenge to improve a well-appreciated wing. But between a new model and its predecessor, there are 2 or 3 years and we could learn a lot making protos and research for the other models of our range. The IOTA 3 project start is in the near future. We can tell you more about that at the beginning of the 2021 flying season, just be patient!

9- When to expect the first Impress 4 harnesses?  And could you please comment a bit about the latest and final version?
The production of the IMPRESS4 started and we may deliver from June, but you know that the actual world health situation makes everything more complicated. It is a competition and XC harness with an extremely high level of comfort and equipment, and a very low weight starting at about 6 kg. Another very special point of the IMPRESS4 is that it can be used with or without a seat-board. It will come as a complete set with a rucksack, a carbon plate, a windshield and 2 pod-handles for the reserves. More information soon on our homepage.

10- Can ADVANCE elaborate on the future design and what pilots must wait for? A new 3 liner D for example ?  or a daily use 2 liners?
We have with the OXA3 such a simple and easy two-liner that we are of the opinion that there is no need for three-liners in the D-class at the moment. 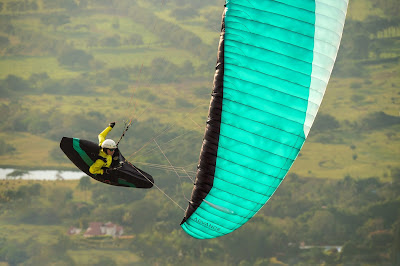 Thank you very much for your time in answering those questions! Looking forward!  :-)