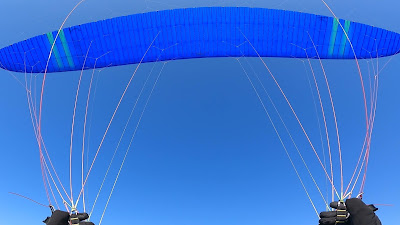 Rods are everywhere from the leading edge to the trailing edge, even on the tips! A selection of thin unsheathed lines all across the gallery.

Very little openings on the shark nose leading edge all across the span.

The A risers on that King 2 are shorter than the B and C ones.

Inflation in nil wind is a challenge! So difficult to get it overhead. I tried to move my hands 20 cm higher, holding the lines. When doing so, pulling upward toward the sky as if you are helping the leading edge to rise is the best option to do. Now it is a little bit better. You need a long take off if there’s no wind!

Inflating the glider at more than 15km/h and holding the lines higher is good. A slow rise that fills the cells and Hop you go. 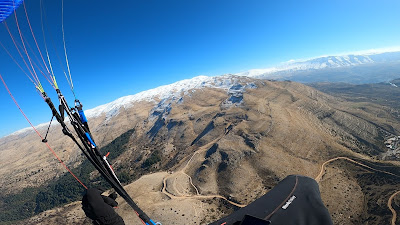 In the air the King 2 brake authority depends on the roughness of the air, when it is moderate, the King 2 can be steered perfectly into the core. The King 2 has a relatively short brake travel to steer it in the air. It is not very linear, but agile. I mean it turns quite fast if you apply the brakes, with a short no very linear feel through them. The pressure on the brakes is moderate and harden a bit after 20 cm, but I didn’t use it on all my flights.

When it is strong disorganized and turbulent, the energy inside the glider will prevent a coordinated and swift authority on the brakes. It needs more time and application to replace it into the core. But overall it is ok. I can confirm that in most moderate air, the King 2 is an agile glider for its 7 aspect ratio. 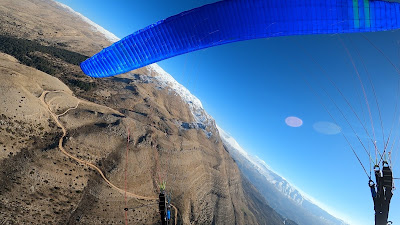 Flying it in very weak thermals next to the M7 was a bit difficult to maintain the same height as it is really fast at trim to catch those very light thermals. Slowing it on the brakes won’t really matter. It is better to let it fly. But overall it stays quite ok in super light conditions waiting for the next well-built thermal to go higher. In stronger thermals, the King 2 climbs really fast. The fast trim speed helps a lot in entering that updraft quickly and move upwards slightly better than the M7. 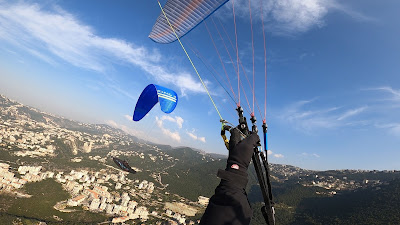 Gliding in the very calm air next to a similarly loaded M7 showed a little difference in gliding power for the King 2, knowing that the M7 was accelerating to match the King 2 trim speed. That difference in calm air is very little. At full bar in calm air, the same differences occurred. It is only in moving air and in headwind good XC conditions, that the King 2 showed its potential.

Moving forward and digging faster the airmass and upward rising through the air is toward the King 2.

The top speed is around 58 km/h taken at 900 ASL. The pressure of the speed bar is slightly hard on the second bar, but still fair.

The B/C system can be used with ease while applying the speed bar. Smooth and efficient.

The King 2 can be considered a relatively comfortable EN-D glider. It needs more active pilot control than a Mantra 7 for example, but less than the Peak 5 for sure. And also, probably slightly less than the Zeno. 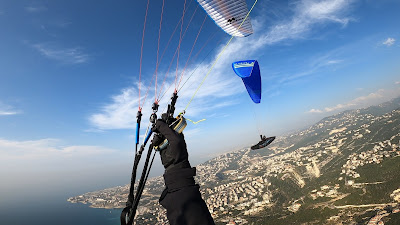 The King 2 work in itself in turbulent air. It pitches forward slightly but doesn’t go far ahead. The roll movements are also present but comfortable close enough to a Zeno.

Ears are doable with the outside A’s and are stable. with good sink rate. The re-inflation needs a pilot application to pump them out. Ears are also doable with the C3, and also efficient, and reopen quickly. The sink rate in both A’s and C’s are around 2.5 m/s with a little bar.

Wing overs are super high, as it can loop only after the second turn!!! Lots of energy ! 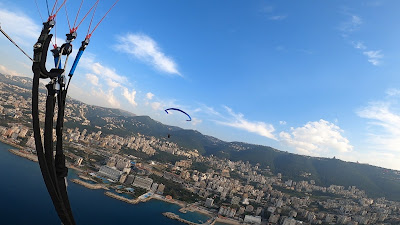 Conclusion:  The King 2 is made for big air and XC conditions. I don’t think any pilot will fly that glider only in very weak and stable air…It will do fine, but that’s not its strongest point. The King 2 potential is for those big windy days,  high bases, and fast transitions. The 3 line configuration of the King 2 helps a lot in getting that compact feel in strong and rough air which isn’t present yet on 2 liners. 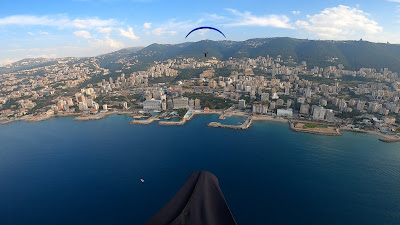