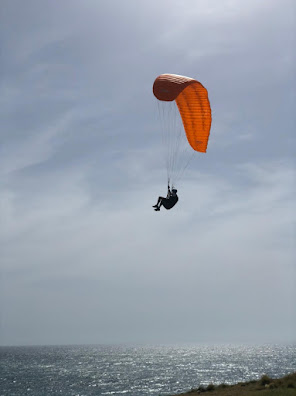 This is my first Little cloud glider. I flew one time an MK2 from a friend, and I appreciated the handling and the swift response.

Now for soaring and playing on our beach cliffs, I had an Axesse Zunzun, 21  which I had a really nice quality time on that glider when the wind was 35 km's max!

As the Puffin came out and lIttle cloud specifically made it for high wind soaring and playing on the dunes, I was excited to get one.

And there it is. With a very light harness and my all-up weight of 80, I purchased the Puffin 16.

The Puffin has a shark-nosed three risers with trims. My first encounter with the Puffin 16 happened on a day with a wind over 40 km/h.

I was a bit very focused on what to expect, and wanted to try it with a little less wind…but the glider was here, and the wind was strong.

Over the years, it happens that when exchanging wings so quickly for testing, I developed an ability to quickly assimilate the newcomer. But the Puffin 16 was a small glider and I thought I must kite it a bit to feel it.

Before taking off, I spent two hours playing with it on the ground and trying to cope with the feel under it.

Pulling on the A’s in that wind showed me that the little one is dynamic but … very well balanced! Very fast to take off, but very balanced to keep it overhead. At first, kiting the Puffin 16 showed me that I need to switch on, my other sleeping senses!   Which were greats as I really needed that extra awakening!

Kiting and flying the Puffin 16 re-charged my old batteries!

Playing around seems endless… an immense pleasure to kite that diamond!  For me, It was like riding a professional go Kart! Love it !!!

Then I flew on a ridge is very gusty wind. It is a bit different from flying on rounded dunes. The ridge's hard edges and wind makes it a bit more turbulent. Taking off in a 40-45  Km/h wind wasn’t that frequent….and I never thought I could fly forward…But my brain was convinced, and I took off.

The Puffin moves quickly and needs of course more active pilot control than a normal paraglider, but …it really moves forward as if there’s no wind! The sea was howling…and there were white caps everywhere, and I should get my windsurfing equipment right now!  But I was flying the Puffin 16!

The authority on the brakes is quick, direct, and sharp. Simply, delightful as I could steer it immediately where I wanted. Of course, if a dynamic brake is induced, the Puffin will dive quickly.  The brakes are firm but not hard. I flew that glider with trims closed and I also tried to fly at half trim, when it was very windy, and I must say it erases the wind!

Conclusion:  The Puffin 16 is a playful glider for soaring in high wind. Our very small soaring site is only 20-30 meters high, so it needs lots of wind for a small glider.  It is certain that flying the Puffin with an open mind and clear conscience, will increase and enhance your reflexes. I spent happy hours the next day kiting it,  flying, and playing around in a 30 km/h wind.

You never get tired of it.

For my experience in flying mostly conventional gliders, the Puffin 16 looks like the fast Brazilian free-tailed bat!  :-)