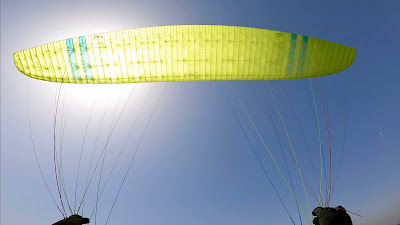 Ok…Let’s begin with:   I’m very happy and content to have flown that glider. Bye

For the readers who want a swift and direct-to-point conclusion!  😆

The R-Light S is the light version of the Rook 3. The same everything besides the light fabric used. Now it can be folded smaller and for sure, lighter to carry.

The small openings on the leading edge require a slight wind to fill the R-Light properly. With the light fabric, it feels lighter when pulling the A’s but still needs a steady and patient pull to fill it. It is slightly better to fill than the Rook 3, but little patience is needed in nil wind.  In 10 km/h wind, it is easier to fill it. Some B’s like the Base 2 for example fill faster, but this is definitely not an issue for any high B pilot. Just to be precise about it. In nil wind, I was able to launch in a 10-meter take-off, before the cliff. Others B’s in 5-7 m. 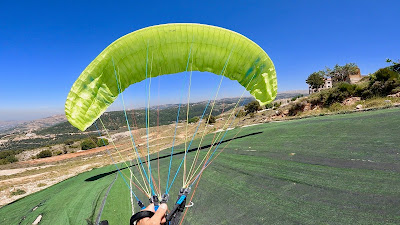 I flew the R-Light S at 84, 85 all up, and that was just the optimum weight in all conditions in order to feel it and to dig through any conditions from super weak to strong air.  At my side of testing was a Base 2 M at 93 and a Swift 5 S at 84 also.  I tried the R-Light 3 S with two harnesses ( Delight 3 M and Genie light 3 M ( which both are different).

Now I can write about both harnesses and the difference under the R-Light S at 84 all up.

Let's talk about the Genie light 3 / R-Light S.  The Genie light 3 harness gives a nice weight shift authority with any used glider. With the R-Light S, it was indeed a pleasure to fly! In strong air, the R-Light S with both harnesses showed me a relatively comfortable ride for a High B. Some will prefer more dampening like the Swift 5 or the Base 2, but for me the R-Light S was perfect. Not too boring nor alive. Perfect feedback for a keen pilot. If you used to fly a low aspect ratio very comfortable C, you will be comfy on the R-Light S with the added large passive safety. The feedback on both harnesses is what a keen pilot would require from a high B without erasing the pleasure of feeling the airmass and getting the bits and pieces from it!

The difference between the Delight 3 and the Genie Light 3 under the R-Light S is that only in very strong conditions, the roll movements are more dampened under the Delight3, but the important thing to know is that under both harnesses, the R-light S had a swift and direct authority on the brakes that enabled it to put it exactly where you want inside the turbulent air mass. So no need for a specific harness to be very precise of turns.

I have to add that the R-Light S has a short, precise, linear feel (each cm pulled react the glider), medium pressure( Harder than the Swift 5, less than the Artik 6, or the same as the Rush 5, to give you an example…and crispy feel (The little more centimeters you pull, the more you feel the brakes in your hand)  To finish my description, I have to say that the movements coming for the glider are felt 70% from the risers and probably 30% from the brakes. Just because it happened that when entering a core the R-Light S leading edge pulls slightly forward, and surprisingly one hand is being slightly pulled where the most powerful lift is!  (left or right)  But a very gentle pull, that you need to listen to it informing where the core is. I really liked that!. That feel was present in a much more pronounced way on the UP Trango Race! which had an amazing brake feel!

Flying the R-Light S at 84, 85 all up was the best to surf through the airmass. Flying at that load never altered my efficiency to climb in weak air. Some pilots feel that flying at mid-weight will give them a better lift. Of course, but they will miss every steady core of the thermal, just because you need to enter the air mass and find the best and stronger lift in every thermal, and for that, you need to be in the best part of the total weight in your aircraft. 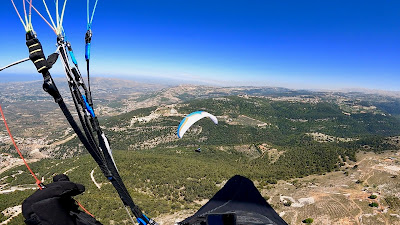 For me, I was very efficient at that loading feeling the light lift, and moving forward to get the better and stronger lift. Next to one of the best B’s in terms of climb rate which is the (Swift 5) I found out that the R-Light S at that load is inseparable in climb! So with my reference, the Swift 5, I felt that the R-Light S is matching it in weak, strong, and all conditions. The difference between the two is that the Swift 5 has a longer brake travel and slightly less responsive in turns than the R-Light S if both flown at 85. The Swift 5 S needs to be flown at 87 to be equally efficient in surfing the airmass, while the R-Light S was cool at 84 all up.

Flying next to the Base 2 M at 93, I didn’t feel also any advantage for any glider. The Base 2 had a little better trim speed, but we were inseparable in the climb.  The Base 2 M was a bit more comfortable to fly. I think I will get a Base 2 S size to see the difference in comfort also. (Later)

Again gliding many times, next to the Base 2 M and the Swift 5 S, there was not really a noticeable difference in glide. I can strongly confirm the R-Light S glides really well and doesn’t lose its gliding efficiency in diving when encountering moving and sinking air. The glide at half-bar is very usable and offers also the best glide in the B category.  The top speed is around 15 km/h over trim. The difference of the glide at top speed with a Delta 4 MS is very very little!   The difference that can be seen in moving air is that the Rook 3 and the R-Light 3 are slightly slower to enter the airmass than a C glider. That’s it. So there will be always a little advantage for the C’s. 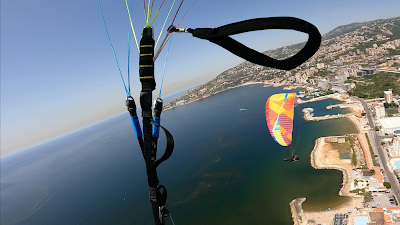 I felt that going on the half bar in all the crossings will reduce slightly that effect if the c’s are not pushing on the bar often. 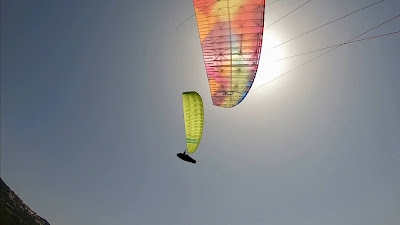 I added that just because it is so important.  Who does benefit the most from flying the R-Light S?  Pilots are very different in character. With the same B performance, some would like a free of movement and very dampened glider. They couldn’t care less about brake fans and would prefer pure performance over anything else, which I do respect and understand.

The R-Light 3 S, moves less in turbulent air than the PHI Maestro 21 for example but needs a good B pilot that favors the exact spices of feedback it delivers, a sensible pilot for the responsive brake fan, who appreciates the authority given to him by the glider to place it accurately in the airmass, and finally, the pilot who needs that cocktail of a ‘light’, agile, high-performance B glider. If you are that pilot, then definitely there will be a guaranteed smile on your face.

Like the normal version, the R-Light S packs small and offers the best performance in climb and glide for the B category. The top speed is very good for the category. Ears are stable on this light S size and reopen smoothly without pilot control.  It needs a sensible pilot to appreciate its thermal behavior.  I found that flying it at max load is the optimum load to get it efficiently into the airmass. My test describes accurately only the ’S’ size flown at 85 all up. I really had a very nice time test flying it!  Try it if you can, or other sizes, at max load, and your comments will be highly appreciated!  Happy flights :-)