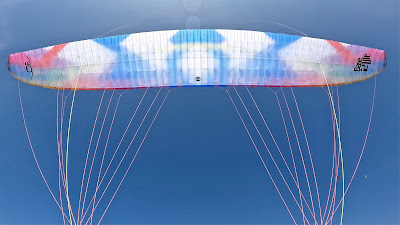 I already flew the normal version of the Base 2 in two sizes M and S, and the review has been written on my blog. Here is the light version in size S flown at 84 all up.

The visual difference is the light risers with also a C steering capability, and thinner webbings. as seen in the picture attached. 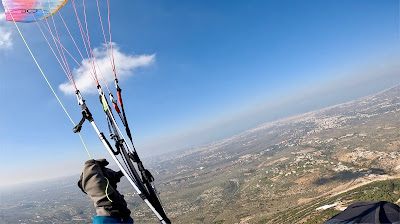 Launching the Base 2 light S is really nice. The base 2 light launches even if you don’t touch the A risers! I mean it's really easy and very straightforward even in no wind conditions!

Launching the Rook3, R-Light, was difficult, also the Rush 6 seems nicer than the R5 but still, the Base 2 and especially the Base 2 light is very straightforward even in a very small take-off area.

In the air at 82 to 84 all up, the Base 2 light gives a softer feel than the Rush 6 in size MS. It feels more comfortable to fly than the R-Light S and the Rook 3 and for sure more than the Rush 6.

The overall movement in pitch and roll are smoother and more forgiving for a newcomer to the high B. Much like the normal version, the light seems to have the same overall feel, with probably a slight mellower feel if I’m going to compare the Base 2 normal S and the Base 2 Light S.

The brake travel of the lighter version seems quite shorter than the normal S size with only 10 cm to steer the glider in a thermal! That’s quite good for a high B.  But it seems that I found the brakes too short to my taste in the factory settings. So I top landed, readjusted the brakes two times…to find that releasing 12 cm of travel gave me a slack of ± 6 cm before the brakes has direct contact on the trailing edge.

The Base2 Light S can be steered very tightly into the core with a linear response through the brakes and a short response. The pressure is similar to the Base 2 S which is lighter than the Chili 5 of course, or even the Rush 6. Probably similar to the Swift 5 S but with shorter and more precise brake control.

Off again, I flew next to other high B gliders to understand better the overall efficiency. The glide angle resembles the Base 2 with probably a slightly slower glider to enter the airmass than the normal S, but still puts the Base 2 light on par in performance with the normal version.  The top speed with pulleys overlapping gave me an 11 km/h increase in speed. (Video later on) 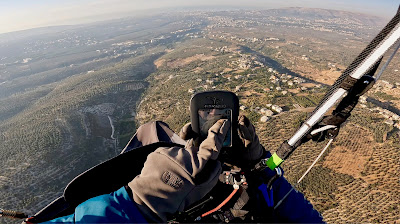 The Base 2 S climbs well in thermals. It slows slightly upon entry but climbs well.  Hands up when entering will allow the glider to breathe better.  The B comparison is updated for pilots looking for more details.

Big ears are stable and reopen quickly. Landing in a tight spot is easy as the glider can be slowed down quite well.

Conclusion:  The Base 2 Light S is a pleasure to fly with its very nice handling and authority on the brakes for a high B. The overall performance in climb and glide are among the good ones in that category.

I think if you privilege fun, ease of use, with also plenty of cool performance, and especially a relatively comfortable glider to fly for the high B category, then the answer is simply the Base 2 Light.