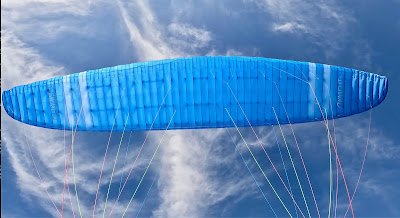 I still remember quite well the Knight 1 when I test flew it. Triple Seven is delivering now its second version. In this test, I will describe the differences found in both versions in every aspect and will insert some B gliders for comparisons.

The Knight 2 is a mid-B glider as stated by Triple Seven as they consider that their Pawn EN-A glider could fit as a first glider after training.

The construction on the Knight looks very neat. The same construction is seen on Rook 3. Triple Seven used the same line width, lengths, and configuration as on the Rook3. If both gliders are on the ground, there will be very few differences to see between the two.

The leading edge openings are also practically the same. Very narrow small openings.  The risers have a C to the B steering system. Here’s the link for more pictures> https://777gliders.com/gliders/knight-2/

Have to mention this important notice in all my tests>

Today’s gliders with ‘no’ exception for any low, mid-high B or especially C or D will eventually change their trim after some 20-30 hours. When they do, they usually get a bit slower sometimes they bump a bit more into the airmass. Some pilots won’t notice at all, and the glider will still fly nicely. Some more delicate pilots will feel it more. So, if you want your glider to fly as it was before, or at least close enough, you must re-trim it!  Usually, it is very simple as some knots must be released, and asking your dealer/ importer will gladly tune it for you. That’s the case for any paraglider in the market today.

Launching the brand new Knight 2 MS at 93 all up is a bit slow to launch. This is due to the small openings that need a steady and slow pull to fill the cells with air.  It inflates slightly better than the Rook 3, but still not as fast as an Ion 6 or a Buzz Z 6 for example. But that’s fine, the difference is just a few steps more.

Flying the Knight 2 at 93 all up with my X-rated 6, showed me a calm glider in overall movements compared to the first version. The pitch is nearly absent and the Knight 2 moves forward in a very calm way. The biggest difference over the Knight1 is the Knight 2 doesn’t slow down before thermal entry. It just slips through without bumping into the airmass when properly loaded.

I think this is one big step for the Knight2 as it seems to get through the airmass without difficulty. But of course, it is slower to enter than a Rook 3 for example, but at least it keeps moving forward with very good efficiency for the low, mid category.

The brakes are very reactive with only 12-14 cm to turn the glider in moderate thermals while having a medium pressure.  That’s quite nice for that category. The Knight 2 MS at 93 is an agile glider with a very high rate of pleasure when steering it. Sometimes I could turn it very tightly on its tips in a narrow core. It is so easy and relaxing to fly versus the Knight 1 which was a bit more handful in comparison.  The overall movements are coming from the risers, not the brakes.

The trim speed is similar to any low, or mid B glider.

Those gliders in that category are mainly created to deliver maximum fun, plus good performance.

On one promising day, in our winter period while I was reluctant to test fly it was just because I thought I’ll miss my usual XC route…The Knight 2 was in my van next to my other gliders and decided to take it in order to finish this test.

Once airborne, I was next to some pilots flying 2022 high Bs and C’s. It was still weak but I sensed that the Knight2 was effortlessly climbing! That glider could float really well. As it is slightly slower in overall movements and speed than a Rook 3 for example, the Knight 2 just sits in a thermal and embraces it. The climbing in the weak is really good! I found myself effortlessly detached from the group, with 700m above take-off!

Transition with the first bar seems sorely efficient. The Knight stayed on the rail with a very good glide angle. Later I realized that with 2-3 cm on the bar, the glide is not far enough from the Rook 3. But for sure, the Rook 3 in moving air will compensate much better its efficient glide through the air. It is just an idea that on Knight 2 I was still reaching my usual points quite easily!

After 3 hours I was able to go where I usually want to reach, a bit slower, much mellower, a huge time for smiling, looking around, and taking pictures.

When you are used to flying different classes, the feel is obvious! On Knight 2 the time is slower to pass as if smoking a certain weed ;-)  Hellllooowww I’m still here….

If you are used to a low or mid-B glider the Knight 2 is a superb glider to try.

The first step on the speed bar has a moderate foot pressure, the second step to reach the max speed is a bit hard to pull. Flying the Knight 2 with the C steering system is efficient at the first bar as it can control the movements quite nicely. At the second bar, I think it is best not to pull too much on the C steering as it can deteriorate the glider shape.

Ears have moderate stability. Sometimes they seem stable if small, if a bit bigger they intend to flap.  Full speed over trim is around 11 km/h. 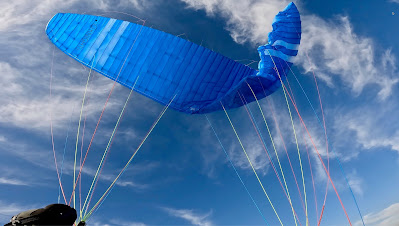 The overall comfort in roll and pitch is slightly similar to an Ion 5 XS for example. The take-off characteristics in nil wind of the Knight 2 could be better! The ears flap a bit. The C steering is more efficient on the first bar.  I will update the B comparison next week hopefully.

The Knight2 has a nice ability to cut through the airmass for a mid-B and move forward.  Today’s low or mid-B’s offers a high package of comfort and very good performance and they will surely get you very far in your XC. If you seek that exact package, then the Knight 2 is a good contender with those options. The optimum weight load is around 90% of the weight range. Finally, this is only just a small idea. Every pilot has his own taste and requirements. The best option for each is a test flight.