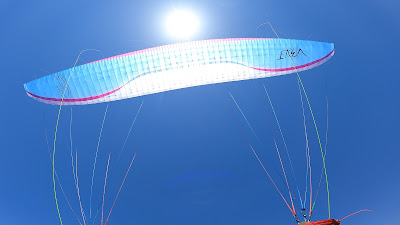 This choice of a very different line layout with the skinnies on the brakes and on the rear B attachment points screams for performance! 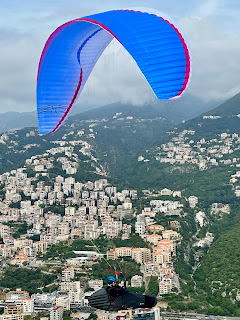 Flying different C gliders over the years made me a bit feel suspicious about a 2 line design…I thought in my pragmatic head that manufacturers will release a 2 line design for marketing purposes and in my hard-headed mind, imagined that in strong air it would be quite snaky and probably difficult to maintain a 6.5 AR with C certification…

I reached the take-off on a sunny day with blue sky, but with layers of inversions. I know these typical conditions in my area, where it would be strong, and punchy until I get over all those thick layers. It was the best time for me to test fly the VOLT 4 and to see how it will behave in those nasty conditions.

Launching the VOLT 4 with  10, 15, or even 25 km/h wind is relatively very easy. No complications whatsoever.

As the openings are small, it needs just a little time to fill in. So the rise on the glider is slightly slow in nil wind, keeping pressure on the risers but steady, as it fills with air and the take-off is very easy. Some examples: 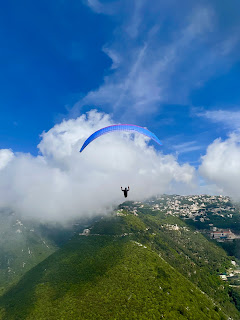 The VOLT 4 launches much better than the Rook3 and is similar to the Alpina 4 MS. The light Mantra 7 MS fills quicker with air but goes up faster. Overall, it is very easy to take off even in nil wind.

In the air, the brakes are short, and direct, with good agility. The glider calmly obeys each input given by the pilot even in turbulence resembling a very polite butler. The turning radius is efficient and could be very narrow. They are slightly linear but mostly direct.

For my personal taste, the action on the brakes of the VOLT 4 is quite good. Probably a bit hard when pulled over 30 cm. But very satisfying to keep the authority of control on the pilot side!

The conditions were as I expected. Broken thermals at first on the lower layers, lots of turbulence, and sometimes punchy conditions.

I was surprised by the excellent behavior of the VOLT 4 !  The pitch back isn’t noticeable!  and the small pitch forward is incredibly efficient to enter with the VOLT 4 stopping inside the thermal!  Translation: It goes forward inside the cores and slows with the feel of a stop! as it goes up! Really nice!  All that with a super solid very homogenous structure!

My stubborn brain wasn’t still understanding how it could be possible to have such a homogenous structure with only those attachment points! And as the flight and fight continued to pierce those inversions, until finally I reached 900 m above take-off and pushed on the bar going north. 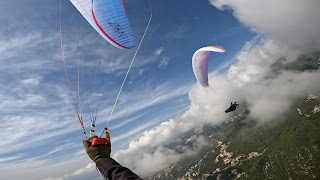 The pressure on the foot pedal has a moderate pressure on the two steps, and I could gain some  + 17 Km/h  over the trim speed. While cruising at the half bar, the B steering is very efficient. It is the first time on a C glider I can feel the 2 liner efficiency! In turbulence, I could keep the VOLT 4 quickly above my head while on the B’s. I think this is the first real 2 liner efficiency on a C!  And it worked!

I think it has to do with its character to get inside quickly but without any excessive movements.

Gliding was also very rewarding for me. After some gliding alongside good C’s, I can confirm that the VOLT 4 has now the edge of the best glide in the C category, especially when pushing 1\4  on the bar!  the glide is probably at that speed and is the most efficient on a C! 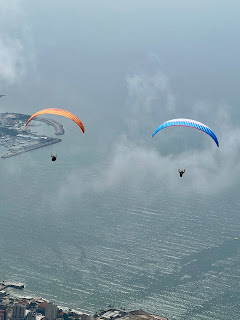 If you ask me if it reaches the Mantra 7 glide angle, I would say it is close but not yet reached. But in strong air, there’s a tight competition…However, the top speed is +2 Km’h over the M7.

Now there is a very important notice I have to mention:

Later, I flew the VOLT 4 with another lighter harness (Genie light 3) at 88 all up and I noticed something new to me.

Usually, when you fly light on a 3-liner you get better float ability. But it seems that with the VOLT 4, 6.5 AR 2 liner C, things are quite different!

When I am light on the VOILT 4 it feels like my weight shifts to the rear of the glider. On the B lines… when entering the thermals, it slows more and is not as efficient to go through. But when I loaded the same VOLT 4 at the top weight (92), and even in weak thermals, the feel of my all-up weight is shifted to the front A risers! and entering the weak thermals was more pronounced! All that to say is with this new 2-liner the difference in weight is quite feelable. So I found it best to stay at max weight in all conditions in order to “ benefit” from this construction.

When flying it at low weight, it still climbs moderately in weak air with the urge of wanting it to go through that airmass quicker.  Loading it, will spice your senses and feel better with an efficient leading edge!

The difference if feeling when lightly loaded between the 3 liners and the 2 liners is very big to my personal feel.

Ears are stable if pulled normally, and they are efficient. They reopen alone at 92, and even at 88 but slower and they recover by themselves.

Doing some wingovers, showed me the hidden energy of the glider, especially at 92, and 93!  Landing is super easy with a late stall point and efficient energy. There’s a marked parachutal stall before a full stall which is easy to feel. 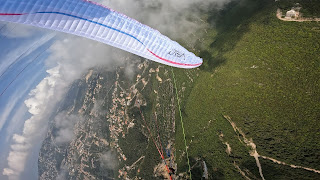 Air Design has created the first 2 liners C and it is definitely NOT a detuned 3 liner! It is a fairly accessible, comfortable, and docile C glider with 2 risers!  I am really surprised by that achievement!

If any pilot wants to fully benefit from it, he must forget the 3 liner recommendations, and absolutely fly the VOLT 4 fully loaded at top weight!

When loaded at the top, the A’s are more loaded and the pilot will benefit more in strong air by the ability to move forward with a very efficient glide at the bar.

The B steering is very efficient when using the bar to stop surges and stay on rails.

A new discovery for me after all those years. I am very keen to see what the future will bring to this 2-liner C category! Some will probably push the limits of that category, and others won’t.

The VOLT 4 is a balanced 2-liner with a C rating.

Perhaps a test flight would be very interesting to experience the differences between your old 3-liner and this one. Enjoy the future! :-) 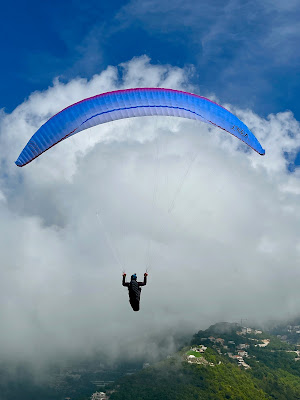