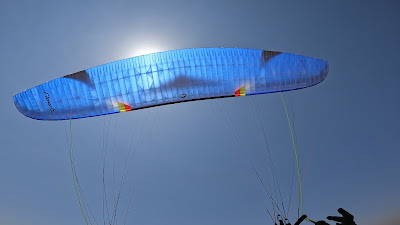 First, I must tell you that I already test flew the older version (Freedom1) and this new high B is nothing close to the old version as if sewn in another dimension!

The Freedom 2 is built with Porcher Skytex 38g and 32g which gives it a semi-light construction. Liros and Edelrid lines are installed like a hybrid 3-2 liner technology and they are quite a few.

A shark nose with a 4 ways attachment point on the A’s, reminded me of a 2 liner construction.

Launching the Freedom 2 at 92 all up on my X-rated 6 harness, with a steady pull, in nil wind it is easy without any hard points. In the stronger breeze, the launching is also nice without any shooting forward.

The brake travel was 4 cm shorter than my ‘personal preference’, as I fly with a half wrap…So I just length it to 8 cm of gap after the pulley before trailing edge activation.  The factory settings would suit a lot of pilots especially if they choose to fly it at the lower range…

In this test, I will compare the Freedom 2 with the Chili5 and with the Rush 6 of the same size, that I still have, as I was alternating for three consecutive days and repeatedly flying the R6 and the F2 to feel and see the differences in the same air to describe more accurately. 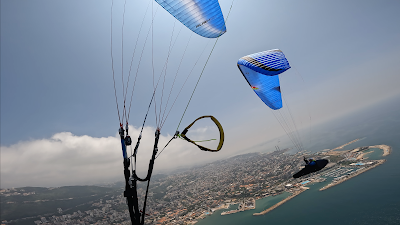 Now I must write as I did before,  that ‘every’ glider in all categories and of course including the high B category will change in feel after the first 20, or 30 hours! There’s no exception from any manufacturer nowadays as they all use the same type and line width. Some will trim it slightly faster, and it will settle down afterward. Some will do some knots in order to release them later as they feel would be differently related to each glider's stress points.  Most importantly, if you want to retain the same feel as a brand new glider, re0trim it after the first 30 hours.

My R6 has also changed after 20 hours, so the feel is more tamed. No more spices in surging forward in thermals, and it became slightly reluctant to go into the airmass and calmer than before. That is the case with all the gliders in the B, C, D, and CCC categories…

So I re-trimmed the Rush 6 in my basement, and the next morning after the first flight, the R6 regained all its nice characteristics with the correct spices I felt the first day flying it! …

and the test comparison began…

In the air, the Freedom 2 has a very slightly longer brake travel and is lighter than the Chili5 if similarly loaded.

Similar to the R6 by maybe 2 cm longer …Very close.  The brake travel on the Freedom 2, is very linear and responsive as the Chili 5. There’s a more pleasurable feel through the brakes for the F2 than for the R6! More linear-pull through the brake range.

The Chili 5 has shorter brakes and is slightly harder. The agility of the brand new Freedom 2 S is excellent! It can be turned even narrower than the R6, and probably similar to the Chili5 (if all are loaded the same! )

Now for the boring stuff…  The Freedom 2 turns as narrow as the Chili 5 but gets slightly better into the rising air mass! ( Some pilots would say I’m getting deeeeeep  :-)   , but that’s the way it felt!

Talking about thermal efficiency is the strong point of Freedom 2. The leading edge has a slight pitch forward in thermals as a new glider!  but…I felt that it embraces the thermal…

With that nice brake authority, I was able ‘easily” to stay in every core!  Why do I say easily…Because it moves forward, climbs well and it stays inside the thermals a bit longer than the others without slipping through with an incredible ability to steer it inside a turbulent thermal wherever I wanted!

Among those three gliders, I personally enjoyed that efficient glider with its nice brake authority and linear response throughout the range.

Now if I wanted to go a bit deeper… some will get more bored… :-)   I will say that in very calm conditions and moderate thermals, the Chili 5 will probably have the edge in climbing over the two. But when you have a more complex air hitting you, then the glider that will have an edge would be shared by the Rush 6 and the Freedom 2 as they both move forward and climb. They are good swimmers in the turbulent airmass!

OK, That’s it! No more Tinny or Stubby today…And I’m not Pissed :-)

As for overall comfort, I flew the Freedom 2 in some nasty turbulent air and I have now a large idea about it. In strong turbulent air, the Rush6 moves as a block. It has dynamic movements in pitch or roll, for a high B pilot of course, but you feel that complete taught glider above your head even if your chest strap is open to 48..50 cm.

The Freedom 2 in the same air, works a bit more in itself, with some slight yaw movements roll and pitch. I found that to remove the slight yaw movement a chest strap of 45 cm will erase a lot of them.  Now in a positive way, If you don’t look above your head the feedback coming from the glider is very useful and rewarding! For my personal feel, that’s the glider I choose to fly for high B just because the educational feedback is awesome! I am not saying that the Freedom 2 is a difficult glider to fly! NO, it is not, but it will deliver very nice feedback that is needed to communicate with the airmass. (for a high B of course! )

Now the part of controlling it with the rear risers. I felt that in most cases I was easily able to control the Freedom 2 with the rear risers, especially at bar. Among the 3 gliders, I would say that they are very close in that issue with the R6 being slightly more direct probably due to the C handles placement. The Freedom 2 and the Chili5 are similar in that matter.

The difference in handling between the Fusion and the Freedom 2 is huge! No comparison…The Freedom 2 has a nimble feel and is more linear through the brakes with direct control.

Now…IMHO,  these new well-sorted hybrid 3-2 construction, high B’s are a direct competitor for their C’s !!  The Chili5, R6, and now the Freedom 2!

The Freedom 2  would (probably) out-perform the Fusion…hummmm…. or similar… Don’t shoot the messager! ;-)

That’s why a completely new era of C’s will emerge…I think.

Ears are stable, easy to induce, and efficient,  they reopen without pilot intervention.

Wing-overs are easy to get and quite impressive. You can feel the energy on that EN’B when doing them!  The stall point is below the hips, near the seating position and it is feelable with a slight stable stall before entry. 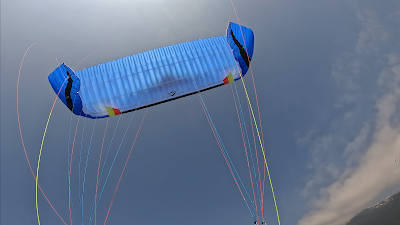 Conclusion: Flying the Freedom 2 as a high B is quite rewarding by the excellent feedback, nice authority on the brakes coupled with a linear pull, and good overall pleasurable handling.

With the Freedom 2, Flow has delivered a nimble high performance B glider, set to achieve long-distance flights.  All that while having immense pleasure, plus overriding going to a 2021, C glider. 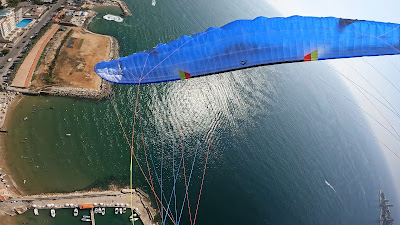