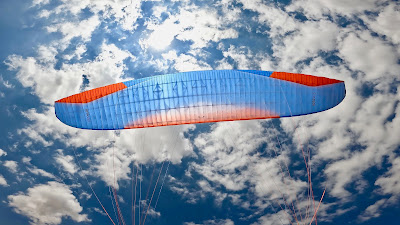 The Iota DLS ( Durable lightweight structure ) is an ADVANCE new high B glider with a moderate aspect ratio of 5.6.

As usual, the construction is very neat all the way.

Having flown all the Iotas, the DLS felt like the most complete and well-mannered Iota to date. But that’s not all…

Launching the Iota in nil wind is very straightforward. No hard points. A slight pull and it goes evenly above your head. In strong air, the launching is also well mannered, but for sure a dab on the brakes to keep it overhead is a must for any high B glider pilot.

While test flying the Iota DLS, I had the Freedom 2 from Flow and the Rush 6 from Ozone.  I spent ten full flying days, in different spots from the Cedars' strong air to the other summer spots where it was sometimes very strong, to very hot and weird… In those days I swapped between those three gliders 3 times sometimes in one day !!  It was indeed a nice 10 days flying…

I will describe the differences between those 3 gliders and some more and will update my B comparison in that matter. I’m flying the 3 gliders which have the same weight range 75-95, at 93 all up with my X-rated 6 harness.

So the launching is similar to the Freedom 2 but the glider seems more taught when it rises. The R6 is much slower to inflate.

I think it resembles the Chili5 in that matter.

Once airborne,  The brake travel is moderate to short that enabling a very nice turning ability.  The pressure on the brakes is moderate to slightly heavy when controlling it in strong air.

They have slightly more pressure than the Freedom2, or the Rush 6 but not tiring at all. I just have to mention an exact comparison.

The brake authority on the Iota DLS is amazing! I could turn really tight with that glider. I think the Freedom 2 and the Iota DLS shares the same agility in turns with a difference in turbulent and strong air, which gives the Iota DLS better control in those tricky cores, while the Freedom 2 needs just slightly more input and resilience sometimes to stay inside that small turbulent one.  It seems that the Iota DLS inner structure is very solid but also very homogenous as I could steer it quite well inside any core and which is a delight to fly!

The feel on the brakes on normal conditions favors the DLS over the R6 as they are slightly more linear. The Freedom 2 brake feel is more linear than both.

To speak about comfort, I must be precise to mention that with 30 hours on the Rush 6 it became slower and more comfortable. Some would like that! But I did re-trimmed the R6 to feel exactly like a new one.

Now you will ask me what about the Chili5 comfort? It is still more comfortable than the three above…But will it match the performance efficiency in real XC of the DLS?  let's see… 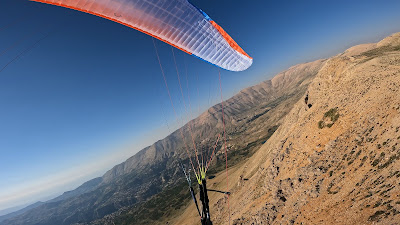 Performance is not done in calm air at all because it doesn’t mean a thing. I do lots of glides side by side in real bumpy air just to see how much the leading edge of each glider is (behaving) in those conditions.

Does it bump? does it move forward and up? does it cut through with efficient climbing like that famous ladder effect on some hot gliders? All that talk will make some pilots say> what .. is he saying? But I am sure that most of you understand very well what I’m talking about.

Doing some glides with the Iota DLS, I was really surprised! That ADVANCE glider matches my reference B glider at trim and especially at the full bar! It rocks !!

The thing is that the leading edge behavior is amazing through the air. The pitch is nearly absent but the jump upward is surely present. The Iota DLS has the most stable pitch behavior than the R6 and F2. It resembles in that matter the Chili5 but with a much better digging through the airmass as the R6 does. 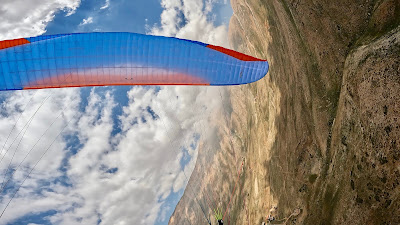 I have flown it in weak air also next to the F2, and I can say it has the same climb rate capabilities. Both gliders are inseparable in weak to moderate climbs in homogenous conditions.

Ears are stable, they reopen without pilot intervention, but could be sped up with a dab on the brakes.

The top speed is around +1 km/h over the F2 with overlapping pulleys for both and the same flying weight.

After those hours flying the Iota DLS and comparing it with my friends, then sometimes alone in those high remotes areas in our Cedars range, where any A glider feels sometimes as a leaf in those harsh conditions, I liked that version very much.  It kept me in control when I needed to be, and well pressurized.

It is a well-sorted machine with top-end, B performance and efficiency in real air, that matches the top-end ones in that category to date!

The Iota DLS is IMHO, the most successful high B glider  ADVANCE has yet produced.

But for sure, a demo will give you a larger idea if only you can fly it at +70 % of the weight range for a mutual understanding of my humble test. 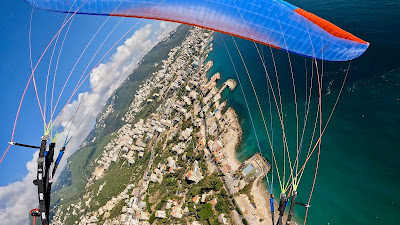