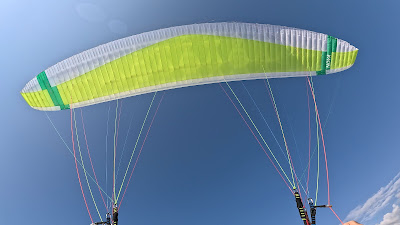 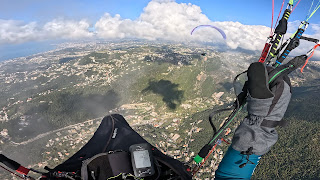 NOVA Mentor 7 Light  XS (75-95)
Disclaimer:
As many of you know me very well, I always follow the new upcoming gliders and new releases, and in  April 2021, I heard about the Mentor 7 and rushed quickly to order one.  In this lapse of one and a half years, I received many emails asking me about that glider, but I wasn’t able to receive it…while all the magazines, Cross Country, FlyBubble, (Tests and videos on their well-respected websites), and lots of other pilots around the world got one or at least flew a demo one, of the Mentor 7 Light!  So despite my many emails, and discussions with NOVA, The Mentor 7 light didn’t arrive until today.
I was indeed unlucky ;-) … 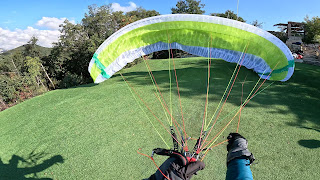 The tests:
Mentor 7 Light size XS flown at 92 all up.
Again, many of you might have seen the Mentor 7 light, the construction and details are really nice with a hybrid configuration, meaning that there are a few attachment points on the C risers reducing drag, and probably NOVA was aiming for more performance, and also getting more interest for pilots who are looking to get the latest design closing the gap to a 2 liner feel… 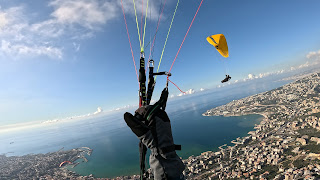 The take-off is really easy with a moderate pull without any hard points in weak windy take-offs. In stronger wind, the Mentor 7 seems also very smooth to launch.
That day, I shared the flight with my friends on their Swift 6 gliders. One  Swift 6 size S (65-85) flew at 84 all up, and another Swift 6  sizes MS (75-95) flew at 93 all up. I was at the same load as the pilot on the Swift 6 MS size, and it was a superb way to experience all the movements, and see the real-time efficiency of the glider in the test.
I flew that glider in relatively strong and turbulent conditions to later weaker and smoother conditions.
I must say….The Mentor 7 Light felt like flying a tandem in the positive side of the meaning. I never felt that dampened behavior on a high B wing, and probably very close to some low B gliders in terms of ‘air information’ and roll and pitch movements. The Swift 6 feels as I test flew it is an easy and smooth glider for the high B category. The M7 light has probably twice the comfort of the S6 !! especially in moving air.  It's even more comfortable than the Swing Nyos 2 RS !!  Is it too much?  Each pilot will decide! 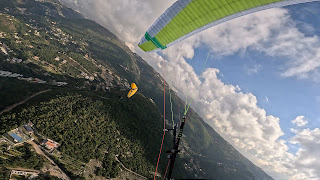 There are pilots who will adore that feel, and some could reach for a more spicy feel like the Maestro 2, Rush 6, for example. Lots of different tastes for all the pilots to choose from.
But I have to say! With this 2.5-line configuration, I think NOVA has really worked hard on the internal structure of the Mentor 7 light in order to achieve that solid and compact feel.
After the comfortable and smooth Air Design Volt 4 as a 2-liner C glider, here’s the Mentor 7  with its 2.5 line configuration, with high comfort for a high B glider.
The Mentor 7 light XS at 93 has a faster trim speed than a brand new Swift 6 size MS at 93 also by +1 km/h.
The brake travel is short with moderate, to slightly hard pressure. The Swift 6, Maestro 2, and Mentor 6 are slightly lighter. And again, some pilots would appreciate that solid feel in their hands.  The agility is quite ok on the M7. Probably a bit less agile than the Mentor 6 XS tops at 90, but still quite good, close enough to the Swift 6 agility in thermals. In some small thermals, I was able to core very tightly without missing the core. 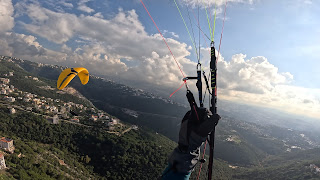 If you want it more agile, try to pull the B3 at half pull inside a thermal, and you will experience a super agile B glider! :-) It's funny to try!
My tests are not only about performance, so I will try to describe the feeling under it as much as I can and that could help you decide if you also cannot get one. In strong cores the Mentor 7 has a nearly absent pitch behavior, the roll also is very dampened. It slides efficiently through the airmass calmly and the climbing ability is surely present but slow.
I mean it climbs ok but needs time to reach the cloud base as the other gliders in the air.  In weak thermals, this insane stability erases the small information about that tiny lift, so it is very difficult to feel that tiny lift, and also the climb is there but needs time to get to higher altitudes. 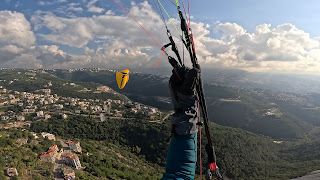 Some gliders could be described as having a good float ability in the rising airmass. The Mentor 7 size XS, that I flew has a moderate float ability if flown at 90 all up.
The turning behavior inside any thermal allows the Mentor 7 to stay on rails. It never gets thrown outside the thermal, and with its brake authority, I could place it immediately whenever I wanted inside a core.
Gliding with my friend on his Swift 6,  ( I think your eyes are more open now? … :-)    Hmmm…Ok, So in gliding in the same airmass my friend pushed a bit on the bar to stay close to my trim speed on the Mentor 7 Light. The glide is close enough and I will update my B comparison as soon as possible for the little details if needed… 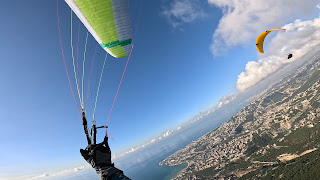 Trying again and again in many types of conditions, showed me that the Mentor 7 light has a very good glide efficiency that is close to the best ones in that category.
Pulling half the speed system showed me a glide improvement on the Mentor 7 light which is really interesting and will place it at the top of that category. At the full bar, the Mentor 7 Light is a fast high B with probably 2 km/h more speed than the Swift 6 with the same load. I think maybe I got a 16 km/h over the already fast trim speed.
Ears while pulling the B3 are really cool! They are very efficient! I could get down nicely on this configuration. Moderate 360s don’t deliver high G’s, and less than many B’s.
Conclusion:
NOVA delivered a different Mentor.  It has a completely different feel, a different design, and a different approach! NOVA aficionados will give their own judgment after a test flight…
I only Wished it had more lift ability and a more nimble feel, but that’s me and my picky bad habits ;-), but for strong alpine conditions, the Mentor 7 Light will let you concentrate on the task, on the scenery, on your favorite snack, chocolate bar, while gliding through that abundant lift.
The combination of accessibility/performance ratio is really high on the Mentor 7 Light.
UPDATE:
Today was a good day to try and fly the Mentor 7 Light, XS at 86 all up.
I changed my harness under the Mentor 7 XS to the Genie light 3 size M which gives slightly more roll and nicer weight shifting. My overall weight was 86.
I have flown on a generous day with some turbulence that my friends informed me later on landing… I thought it was really calm under the M7.

Flying the Mentor 7 light XS at 86 all up, gives even more comfort and still with a very coherent and taught feel. In turbulence, the glider stays well connected. I have flown many gliders, and I think this is not an evolution in feel, but a revolution since this high B glider is calmer than some EN-A gliders. Pilots coming from the low B category will immediately feel at home under the Mentor 7 Light which is targetted as an intermediate glider for pilots who already have flown lower-rated gliders, and like to move a high-performance glider.

In weak conditions, less than 0.5 m’s, the overall movements in pitch and roll are super dampened that I needed to concentrate more on the vario sound to core efficiently as the overall movements are nearly absent in those small conditions.
And of course, being at the middleweight does favor slightly the climbing ability and in a moderate 1m/s thermal, the Mentor 7 light flown at mid-weight will climb close enough to many high B’s. My comparison is updated for the little details. 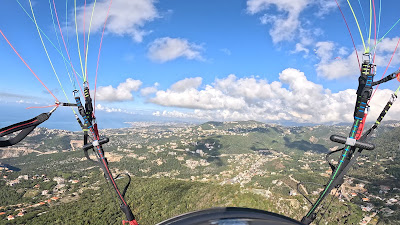