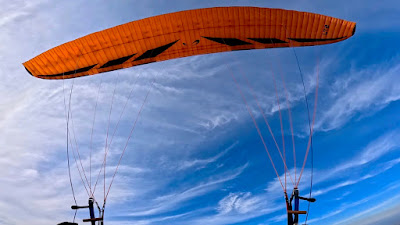 Disclaimer:
Related to my earlier tests: Many pilots already know very well how I do the tests, but I need to continue my explanations for some. When comparing gliders in a weak lift with the same load for both, I feel sometimes that glider X climbs slightly less than the one next to it, which is always “my reference glider” for that matter.  That does not mean that glider X doesn’t climb well, or the pilot would sink and land!  It is just that my reference glider is still a better climber or a better floater…And the pilot on glider X if he flies alone, or if he flies next to less or better-skilled friends will never notice it.
Not all gliders are created equal.    :D
Now with the SOL LT2, it is completely another story …
SOL  LT2  EN-C (2 liner)
SOL is a very old Brazilian paragliding company. Here’s the link to see their multiple and vast catalog of products. https://www.solparagliders.com.br/
In 1991, they designed their first paraglider the Magic fun. Here’s a link to their history: https://www.solparagliders.com.br/linha-do-tempo
I have flown many SOL gliders in the past, Ellus, Eclipse, Torck, Synergy, Lotus one… I know the feel under a SOL glider! They have lots of features, but one thing in common is being good in weak lifts. 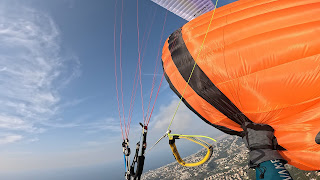 Despite that SOL was introduced 2 years ago, the LT1 that I didn’t unfortunately fly, and which was the first 2 liner intended for the C category public, But wasn’t possible due to EN-C rules. So SOL got a CCC certification.
Now the C certification has changed, allowing the use of collapse lines and other features, and manufacturers are able to insert a 2-line concept into that box.
And hoping to be able to test all those 2 liners…
In this test, I will try to give you the differences between the VOLT 4, and the LT2.
SOL used different materials on the LT 2 from the outside bag to the concertina bag and for sure another cloth for the glider.
The cloth used on top and bottom is called:  WTX 40 gr/m² SI+PU / WTX 29 gr/m² SI+PU.
The lines used are VECTRAN 0,6 - 0,9 - 1,0 - 1,2 - 1,4 - 2,2  /  TECHNORA 2,1.
Even the risers are different, as they used a more supple fabric: Polyester Venus 15 mm. 1.600 kg
Plastic rods are inserted from the leading edge to the trailing edge with a separation in the middle for folding it may be.
The glider is slightly heavier than a normal Delta 4 with perhaps +700 grams more. 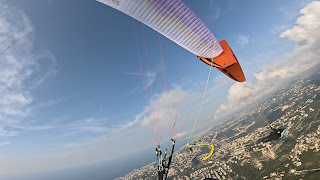 Launching:
I flew the LT2  S size 75-95 at 94 all up, and later at 90 all up which was also ok, and still well-pressurized. But I think around 92-93 could be the optimum weight in overall conditions.
Pulling on the A’s in nil wind has a heavy pull as the fabric is slightly heavier, but the LT 2 comes up evenly, without any hard point, and inflates really well, and with 2 steps I found myself airborne.
In 15 km/h wind on take-offs, the LT2 rises moderately, and no steps are needed to take off! It's immediate.
The LT2 brake pressure goes from moderate to slightly hard. After the 12 cm gap, 10 cm can control the LT2 in turns and showed me calm agility with linear response and nice flat turns,
with moderate pressure.  Afterward, the brakes are slightly harder but the agility is more present and can core the narrowest of thermals!  So overall, I think the LT2 has acceptable agility which is super efficient through the air.  (I will elaborate on that later in this test)
The LT 2 pitch behavior is very smooth and super efficient in weak and strong thermals. The glider pulls you gently upward and goes through that airmass and goes forward smoothly! It is super efficient for the climb!
Flying in very weak conditions next to my reference glider, showed me, an even more, impressive and super-efficient climb rate on the LT2!  When the thermals are even less than 0.5 m/s, the LT 2 floats like no other wing! It reminds me of the Zeno 1 ability to stay in the lift!
That I can confirm. That glider will help a lot in light lift. The LT2 felt solid and yet climbs with a neutral pitch and the whole glider is slipping through the airmass. The feel of a 2-liner under it is very different from the 3-liner feel which doesn’t give you that one-piece solid structure getting through the airmass…That’s the best way I could describe it. 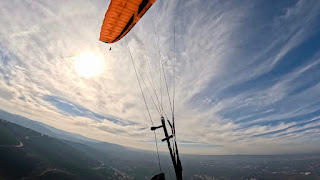 I have flown next to higher-rated 2-liners, D-gliders, and also near my reference in the 3-liner C class. For example, the LT2 similarly loaded as an Alpina 4 same size and load, have one, or two km more trim speed. The LT2 showed me a faster trim speed and the Alpina 4 needed to push the speed bar 1/4 to stay at the same speed.  The glide in calm air favors slightly the LT2, but when surfing the airmass on a glide and getting the lift lines, my friend and I were convinced that the LT2 is a 2-liner from a different class.
The glide efficiency in those XC and racing conditions favors the LT2! On the first speed bar, the LT2 showed us an even a much better glide angle! This is the reference now for the first 2 liners and all the C class 3 liners by a little margin. I think it comes now super close to the Mantra 7 in overall efficiency … 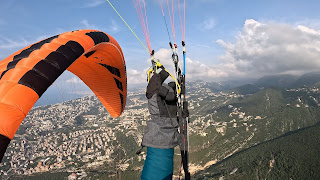 Stepping on the second speed bar (moderate foot pressure) with pulleys overlapping, and with a very taught leading edge, I saw for the first time on a C, +18 km/h over trim, which gave me 58-59 km/h km/h on my GPS in calm air!  At that speed, the LT2 loses a bit of its glide angle.  I think at 50-53 km/h, the glide angle stays superb.
In moderate turbulent air and while being 50 % on the speed bar, the B controls can efficiently control the pitch with moderate to slightly hard pressure on the wooden handles.
The LT2 doesn’t have a high roll movement, probably slightly more than the VOLT 4, but in strong air, the LT2 needs more pilot control as the overall movements are a bit more present than the ones on the VOLT4 and even a bit more than the Trango X-Race.  It has a character of its own. Solid, firm, and fairly comfortable, but requires respect for the C category pilot. It is not a toy, like my reference and excellent Alpina 4 for example. If I want to position it accurately,  in terms of pilot control, the LT2 sits between the 3-liners C class and the 3-liners D class.
Ears with outer A’s are stable, but you need to pull hard as the tips hold some pressure. They fold nicely, and they reopen only on pilot intervention. 360s are quite nice and loose easily altitude without being too centrifugal. Landing the LT2 requires a little of ‘finesse’ in a very small spot as it really floats!  But you can slow it smoothly and accurately with the brakes. 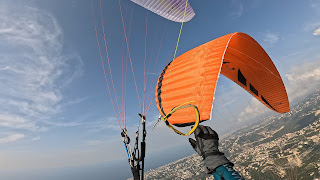 Conclusion:
In my humble opinion, I think SOL created their best C glider to date! Not only that, the LT2 until now has an ‘edge’ on all certified C-class gliders out there. There will be a new crop of 2 liners coming in, and I really hope to see what they will offer.
For now, I received the SOL LT2, and it is a real 2 liner C glider with a solid structure, impressive climb rate, good agility, incredible top speed, fairly comfortable for the keen C pilot, and for sure holds the crown for the best gliding C machine until today 10 December 2022, as I’m writing the review.
Pilots have different tastes and requirements, and I hope you get yourselves a demo LT2 in order to see if that creation meets your skills, and expectations, or wins your heart!
Happy and safe landings everyone :-) 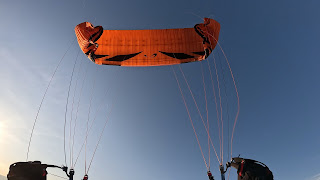 PS: I’ll try to offer you the maximum feedback on my renewed and updated C comparison for the 3 liners and including all new C 2 liners. 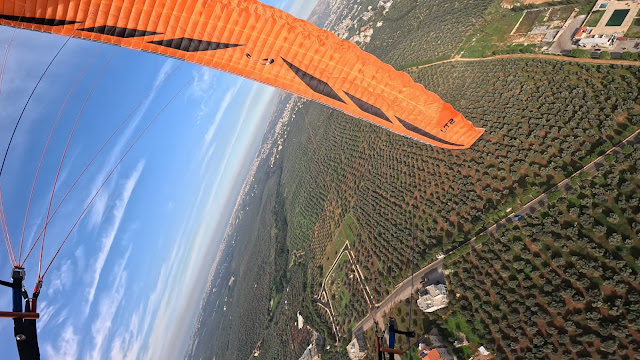